When one finds bangers, which isn’t an easy task up North where we are all Norwegian or German for the most part, one must make an Irish dish to celebrate St Pat’s day.  Besides bangers and mash which come to mind, I wasn’t sure what to stick my sausages in.  Pinterest to the rescue!  A Dublin Coddle sounded like a nice way to roast up a pot of Irish comfort food! 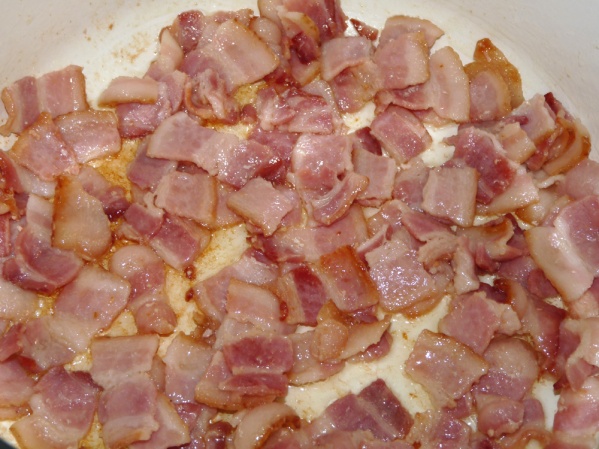 Cook bacon until fat is melted; do not brown.

I heated my Dutch oven over medium heat with a drizzle of oil then added the cut up bacon.  The recipe firmly cautioned against browning the bacon and that was the first thing that made we wince.  I don’t like wiggly bacon.  Perhaps it would brown later in the oven?  I sighed and moved on after the bacon was partially cooked. 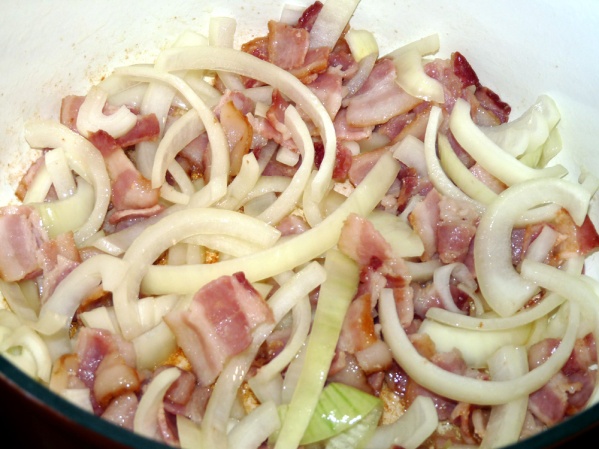 I added the sliced onions to the Dutch oven and stirred occasionally for 5 minutes.  The onions weren’t browned but again I hoped they would soften more and brown a bit in the oven. 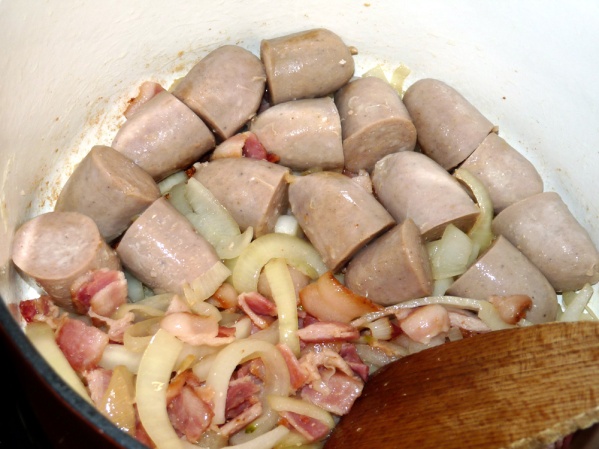 Push bacon and onion aside and brown sausages for several minutes.

I cut up the bangers and added them to the pot, pushing aside the vegetables so that they had room to touch the bottom and brown a little.  They didn’t brown so much but the bottom of the pot was definitely collecting a nice brown coating.  Fond, they call it, and it adds a great deal of flavor to the finished dish when it is scraped off and incorporated into the mixture.

I added the garlic, bay leaves, dried basil and chopped parsley to the pot and stirred well.  I then made a judgement call and added 1/2 cup water to the pot and scraped the bottom clean.  I didn’t want it to all blacken as it cooked in the oven.

I stirred in the carrots then the potatoes and added salt and pepper.  I poured in enough water to come about halfway up the side of the Dutch oven and put the lid on.  Into the preheated oven it went.  I set the timer for 50 minutes.

Stir in potatoes, sprinkle with salt and pepper. Add water halfway up the sides of the contents.

The smells were amazing.  Even my P.S. wandered by sniffing appreciatively and said he was eager to try this new dish.  After 50 minutes I was disappointed that the sausages and potatoes weren’t golden like the recipe pictured on the blog.  They had roasted it without a lid but suggested to put a lid on the Dutch oven if I wanted to do it the “traditional” way.

Bake for one hour uncovered.

I removed the lid and increased the heat to 375°F and let the coddle roast for another 20 minutes.  It was more browned, but still not exactly like the pictured dish.  I’d suggest cooking it an hour at 375°F for the best results.

But this was a delicious dish!  I understand now why the bacon shouldn’t be browned: it cooks so well in the pot that it literally falls apart in your mouth.  The sausages are tender and moist and roasted to perfection.  The lovely juices give the potatoes and carrots so much flavor!  Every mouthful of this dish is a wonder.  We loved it!  I’d make it again with other types of sausages!

A traditional recipe that is made in as many ways as there are cooks in Ireland. This is but one of them!

In a Dutch oven heat the olive oil on medium heat. Cook the bacon until fat melts, but do not brown the bacon.

Add the onion and cook for 4-5 minutes, stirring occasionally.

Push the vegetables to the side and add the sausages. Brown them for 3-5 minutes.

Add the garlic, bay leaves, thyme and parsley. Cook for a minute, stirring constantly. Add 1/2 cup water and scrape bottom of the pot free of the brown coating.

Stir in the carrots and potatoes. Season with salt and pepper. Pour water into Dutch oven so it almost covers the potatoes. Bring to a boil on a high heat.

Preheat oven to 325°F.  Transfer the Dutch oven into the oven and cook uncovered for 50-60 minutes.

Sprinkle with fresh parsley and serve. 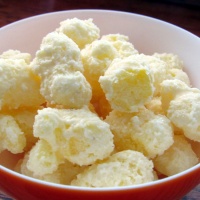