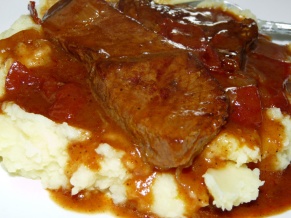 I love Swiss steak.  It reminds me of back when my Mom made it in our big electric frying pan.  I don’t think crockpots were invented yet.  But she  made a big batch of Swiss steak in that frying pan on the counter and I loved the gravy.  I wasn’t a big meat-eater even back then; I was all about the gravy and mashed potatoes.  Weight problem?  Um, yes.  I did eat most vegetables, in my defense.

I didn’t have a family recipe to use for this dish.  I looked around the internet and realized Swiss steak was so simple I never wrote a recipe down.  I did find a recipe I mostly followed on The Spruce.   It produced a dish I think was pretty close to what we used to make.

My P.S. picked out some bottom round sirloin for me to use in the Swiss steak dish.  I’m not great with cuts of meat and where to use them.  He’s my Personal Shopper when it comes to beef, pork, chicken, etc.  He cut the sirloin into smaller steaks for me then cut the rest into chunks to use for some future beef stew.  I thanked him. 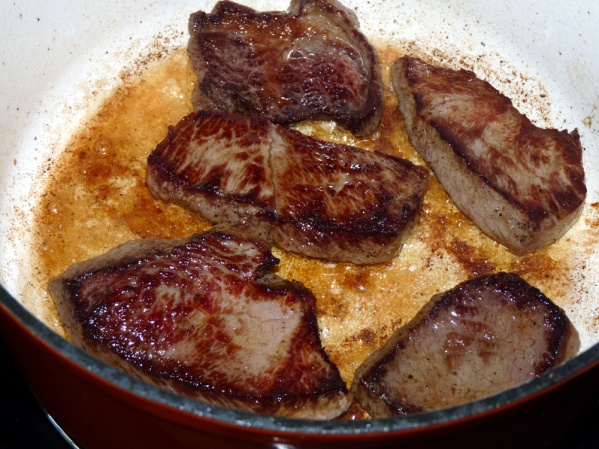 Fry steaks in a hot Dutch oven drizzled with oil until deeply browned on both sides. Set aside on a plate. 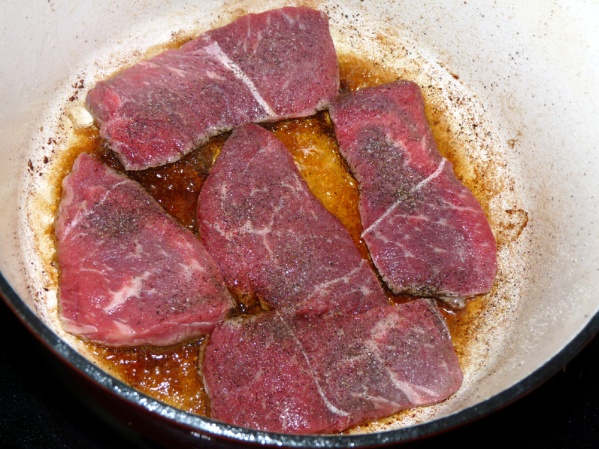 Fry in batches if necessary.

When the steaks were browned I set them aside on a plate and added the onions to the drippings left behind in the Dutch oven. 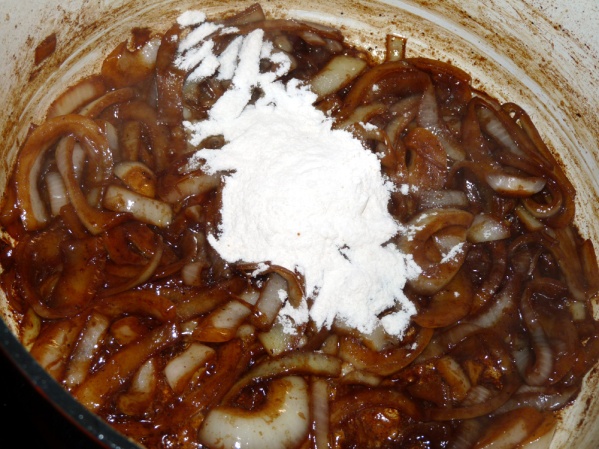 I let the onions cook for 6-7 minutes, stirring often.  When the onions were translucent and browned around the edges I added the flour.  Again I stirred often until the roux I was making was thickened and toasted. 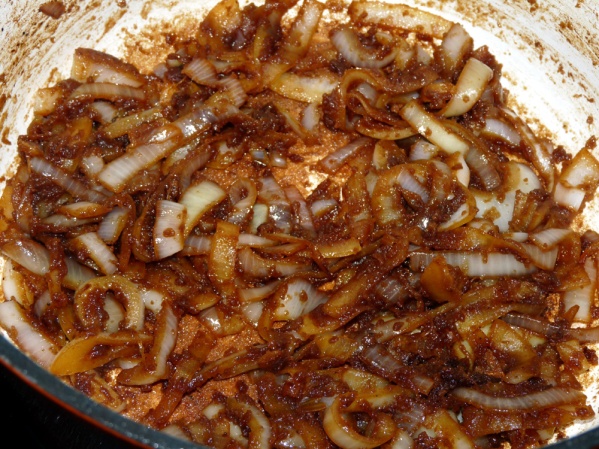 It is easily burned at this point so stirring often was necessary.  We want to have the raw flour cooked out but not cooked enough to produce a burnt flavor!  This roux will thicken the gravy and provide extra flavor. 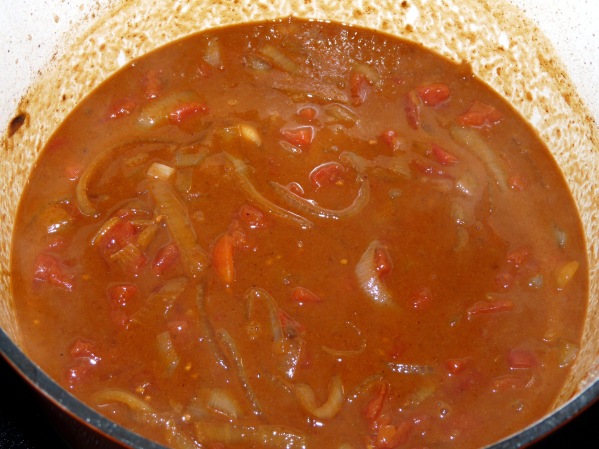 Stir in tomatoes, broth, bay leaf. salt and pepper. Cook until it begins to bubble. Take care to scrape the tasty brown bits from the bottom of the pot.

I added the tomatoes and stock to the pot and stirred well.  I made sure all of the good brown bits were scraped from the bottom and incorporated into the gravy.  I added salt and pepper and the bay leaf and let the gravy simmer for several minutes, until it began to thicken. 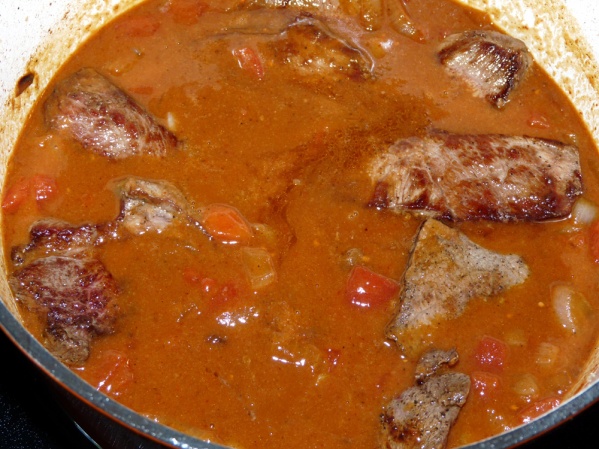 Add steaks to pot and make sure they’re covered with gravy. Put a lid on the pot and slide it into the preheated oven.

The steaks were added back to the pot, making sure the gravy covered them well then I put the lid on and slid the pot into the preheated oven.  I set a timer for 90 minutes. 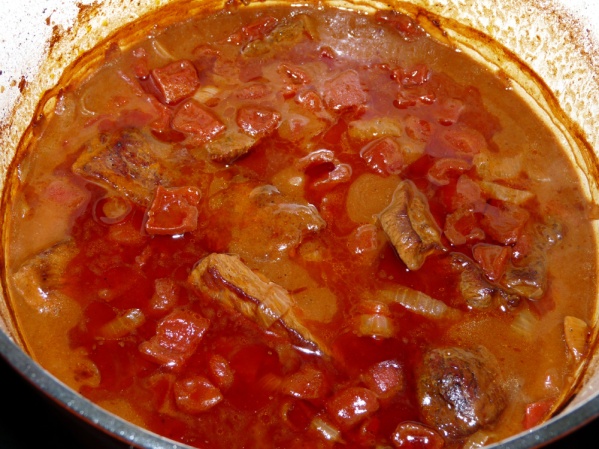 After 90 minutes remove from oven and serve over mashed potatoes, rice or noodles.

When the timer went off I’d cleaned and cut potatoes up and boiled them in salted water, then mashed them with a little milk and butter.  They were our base for our Swiss Steak.  I leave the skins on for that rustic feel, but also because I’m a bit lazy.  And the skins are delicious and nutritious, why remove them? 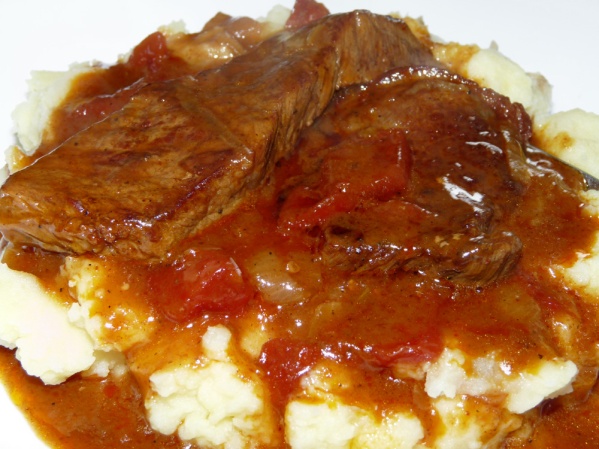 I ladled pieces of steak and gravy over the servings of mashed potatoes and we “mmm’ed” through our dinner.  It had been so long since we’d had it, we were both extremely happy with this Swiss steak.  It was full of flavor and delicious.  Fairly easy to make, I’m not sure why I don’t make it more often!  We had leftovers for a couple of meals and it just got better and better. 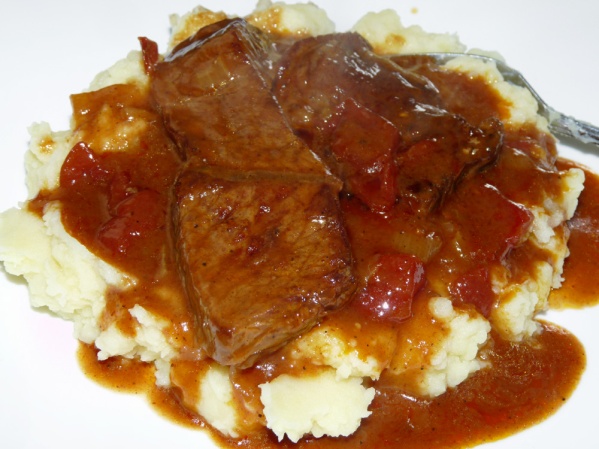 Although I’m not a bay leaf fan normally, there are some dishes where it just makes the meal and this is one of them.  Swiss steak is basically a tomato and beef dish with a bay leaf.  A simple spice for optimal flavor! 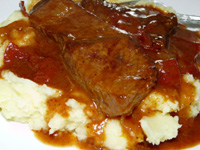 In a large Dutch oven, heat the oil until it’s almost smoking then add half of the steaks. Brown each side for 4 minutes or until a nice, dark brown. Set aside and repeat.

Add the onion to the fat in the pan and cook for a few minutes until translucent and slightly golden brown. Scrape the bottom of the pan to loosen the brown bits as the onions cook.

Stir in the flour with a wooden spoon until a thick roux forms. Lower heat and cook the roux for a few minutes, stirring frequently. Be careful not to burn!

Add the diced tomatoes and the stock. Again scrape the bottom of the pan to loosed any remaining brown bits. Season to taste with ​kosher salt and freshly ground black pepper. Add the bay leaf and simmer the sauce until it starts to thicken.

Return the browned steaks to the Dutch oven, spreading them so they’re all covered by the sauce. Cover the pot and place in the preheated oven.

Braise for about an hour and a half or until the meat is tender. Your oven may vary.

Serve meat with a portion of the sauce over mashed potatoes, rice or noodles.

Adapted from The Spruce