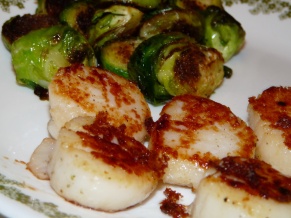 I’d say both my Mom and my Dad are foodies.  They are the original home cooks that experimented with different foods.  We had huge gardens when I was growing up that provided us with a lot of vegetable dishes.  They also bought halves of beef or pork and we always had fish caught during our trips to the lake.  My Mom had a good eye for new recipes.  My Dad had a few of his own favorites.

Now that my Dad is alone, he seems to like to experiment with cooking again.  Soups are his favorite, and he does them very well.  Not long ago he mentioned that he’d picked up some scallops at a seafood business a few miles from his home.  We would “try them out” the next time I came to visit.  Scallops??  My ears perked up at that word.  They are my absolute favorite seafood!

I learned to love scallops when I was about 15 years old.  We were living in the Duluth/Superior area and there were cruises between Superior and Duluth.  The Flamingo and The Flame were the ships, with the Flamingo also the name of a restaurant at the Duluth end of the cruise.  It was an upscale restaurant, one we only went to when it was a special occasion.  There I learned that scallops were very, very special!  Expensive and divine.  So when Dad bought a pound of scallops recently I was ready to cook and eat!

Dad had thawed the scallops and the first night of our visit I started by sautéing a big handful of Brussels sprouts that I’d cut in half.  I sautéed them in a little oil in a large skillet.  They’d be our side dish.  Tasty, caramelized little cabbages.

I rinsed and patted the scallops dry.  You won’t get a good sear on them unless they start out dry, as is true of most meats as well.

Heat skillet with oil until almost smoking. Place 5-6 scallops at a time in skillet.

I heated a second skillet with a little oil.  I put the scallops into the hot oil and probably should have fried them in two batches.  The large amount cooled the skillet a little.

Salt and pepper to taste. Add tablespoon of butter, some minced garlic and baste. Turn and fry onsecond side whe first is browned.

I added some minced garlic and butter to the skillet and basted the scallops as they fried.  My Dad had bought some seasoning the seafood store had recommended, but I wanted mine plain.  I sprinkled the seasoning on a few of the scallops for Dad and seasoned the ones for my cousin Shirley and I with just salt and pepper.

Fry on second side until browned, basting with garlic butter. 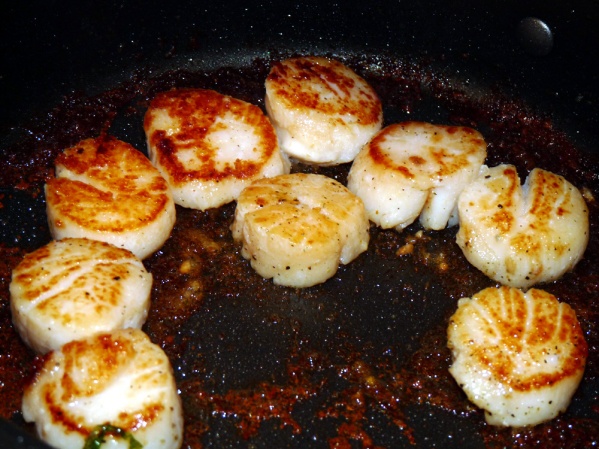 Continue cooking in batches until all are cooked.

When they were browned on both sides I served the scallops on plates with the Brussels sprouts.  They were all that I remembered; fresh and just done.  I’ve seen so many Hell’s Kitchen episodes where the chefs were screamed at by Gordon Ramsey for screwing up the scallops.  I almost expected him to be standing and directing over my shoulder the whole time.  Heh

Cousin Shirley (we’re cousins on my Mom’s side) was visiting my Dad with me for the first time and it was also the first time she’d had scallops.  I tried to explain they were much like shrimp, and weren’t fishy tasting.  I’d say they have almost a corn taste to them.  But the texture is like shrimp more than like fish, since they technically were a muscle. 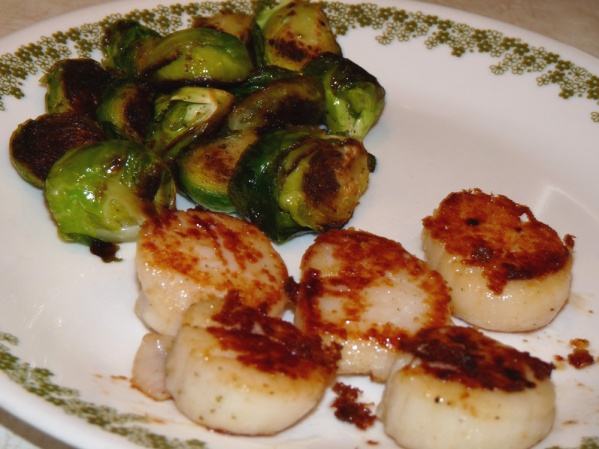 Cousin  Shirley loved them too!  I’ll have to come up with a special occasion to treat myself!  I’d love to have them again soon to practice up on my technique.  I’m probably not quite up to Chef Gordon Ramsey’s standards, but I’d like to practice a few times to get there!

Scallops seared with butter and garlic.

Heat a nonstick skillet with a tablespoon of oil until almost smoking. Add 5-6 scallops to the skillet. Fry them in small batches to prevent cooling the pan.

Sear on the first side until nicely browned. Season with salt and pepper to taste.

Flip scallops and add butter and minced garlic. Baste with melted butter until second side is browned.

Continue frying in batches until all are done.

One thought on “The Time I Fried Scallops”