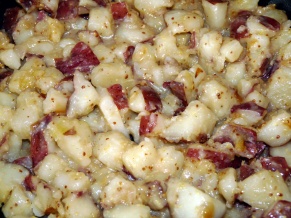 I was finally recovering from a long bout of flu and was in the mood to cook.  My P.S. was more in the  mood to grill.  He wanted hot dogs.  I love hot dogs so I was in.  I also could finally make the warm potato salad recipe I’d been eyeing for awhile.  It had honey and Dijon and red onion and green onion and sounded like it would be an outstanding mouthful of flavor.  Dinner time! 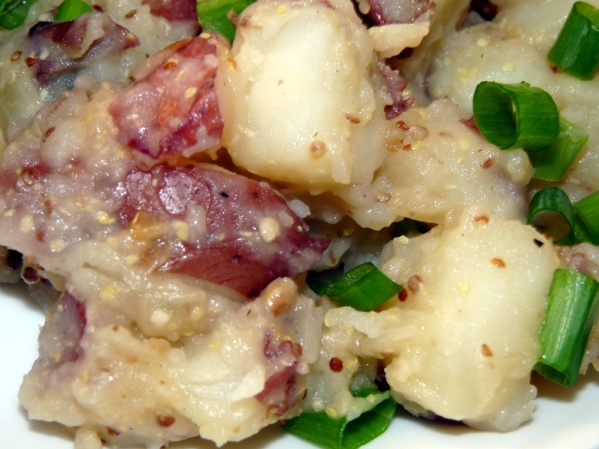 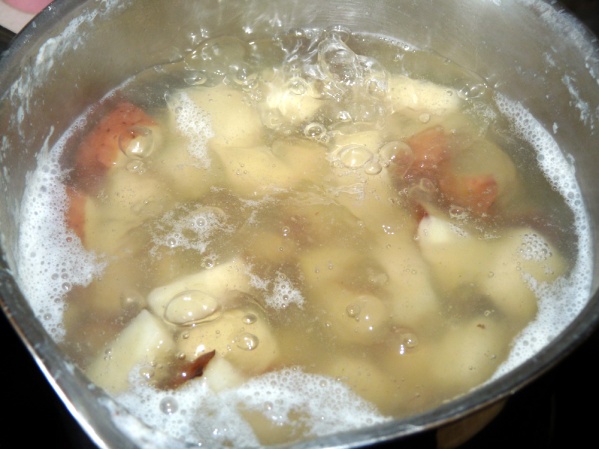 I boiled the potatoes in a pot of salted water until they were just fork tender.  Salt the water well, for best results I use about a teaspoon. 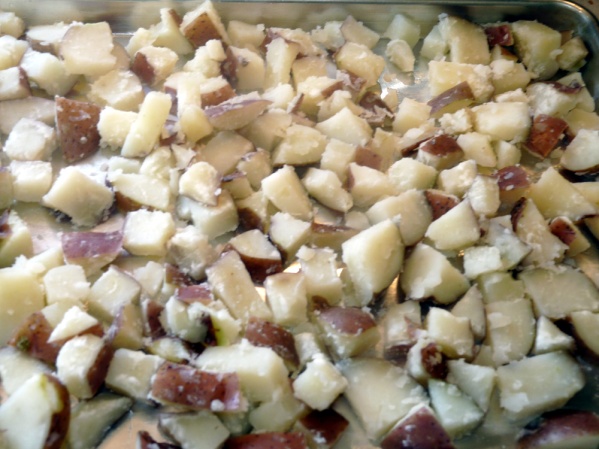 Drain potatoes and spread in a single layer on a sheet pan. Let cool for a few minutes.

I drained the potatoes and spread them on a sheet pan to dry.  I’m pretty sure this step is because they’d fall apart if mixed twice to coat with the two steps of dressing while they were still hot. 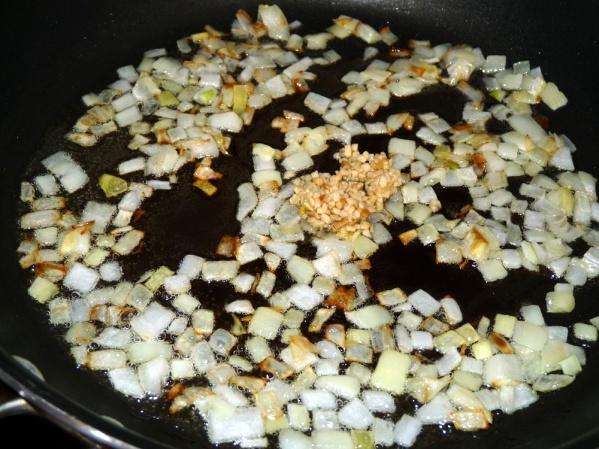 While potatoes are cooling, heat a large nonstick skillet with a drizzle of oil and fry the onion and garlic for a minute or two. Do not let the garlic brown or it will taste bitter.

In a large nonstick skillet I heated the oil, onion and garlic and let it sauté for 2 minutes.  I didn’t want the garlic to get too dark, it gets bitter. 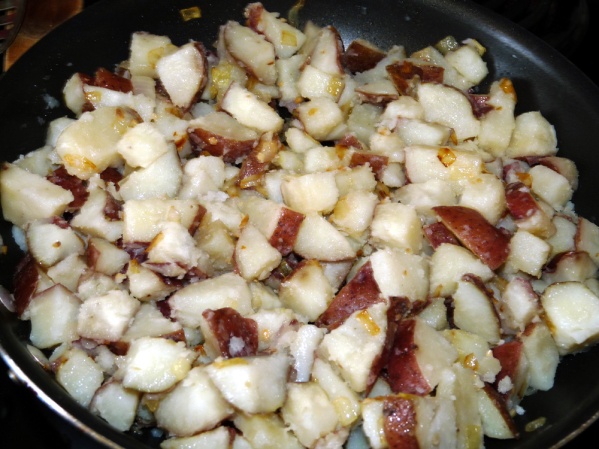 Into the skillet I added the potatoes and carefully stirred well to coat. 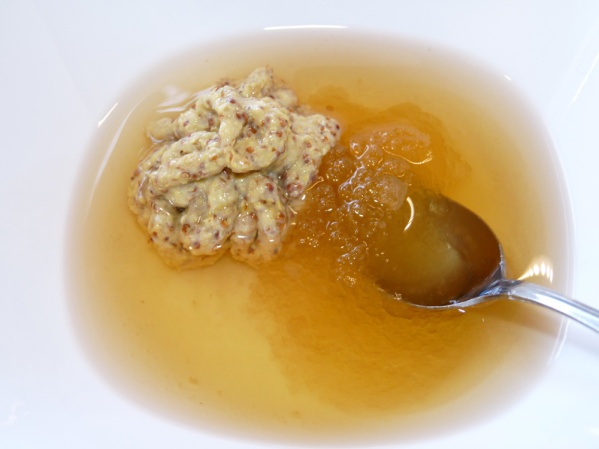 I measured the remaining dressing ingredients into a small bowl. 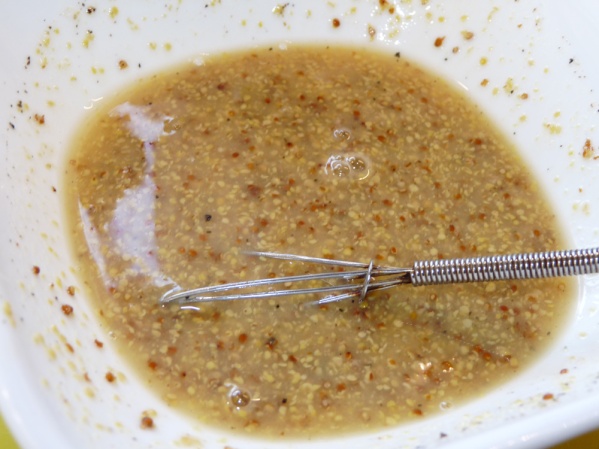 Whisk dressing and pour over potatoes in the skillet.

I whisked the vinegar, mustard, honey, salt and pepper then poured it over the potatoes in the skillet. 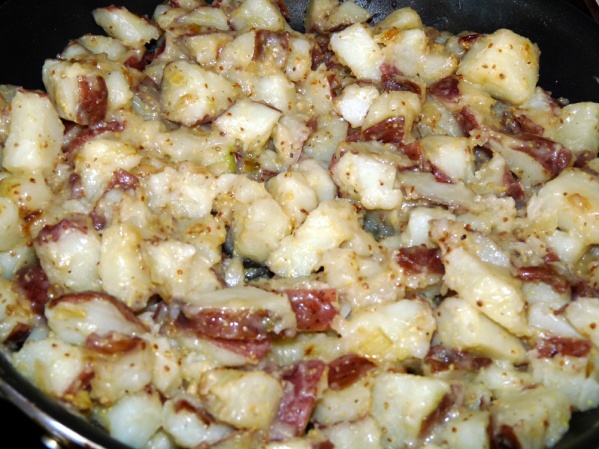 I let the salad cook for a couple of minutes then it was ready to serve, garnished with chopped green onion.

The warm salad was similar to German potato salad.  It differed in having the Dijon mustard which added a nice snap of flavor.  I almost expected to have bits of bacon in each mouthful, as there is in my German potato salad.  I might add a handful of fried bacon bits next time.  I think bacon would work in the flavor profile of this salad! 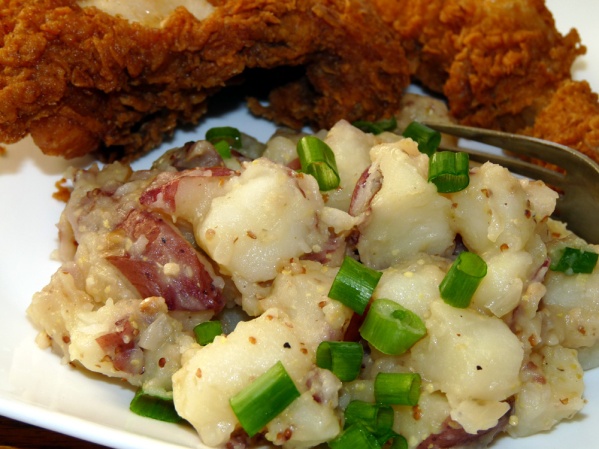 We enjoyed the salad with our fried chicken.  I forgot to mention after a trip to the grocery store my P.S. brought home deli fried chicken, having decided it was too windy to grill the hot dogs.  The leftover potato salad was also good reheated in the microwave several days later when we did actually grill the hot dogs.  This salad was simple, fairly fast, and totally satisfying! 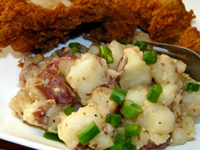 Boil the potatoes in salted water until they are fork tender but not overcooked.

Drain and let the potatoes cool slightly in a single layer on a cookie sheet.  The potatoes will fall apart if they’re mixed with the dressing while hot.

To a large nonstick skillet over medium heat, add the olive oil, onion and garlic.

Sauté together for only minute or two before adding the potatoes and tossing together for a couple of minutes.

Mix together the cider vinegar, mustard, honey, salt and pepper.

Pour the mixture over the potatoes in the skillet and toss together well, cooking for only two or three minutes until the potatoes are well coated.

Before serving, toss in the fresh chives or green onions.