It’s my birthday today!  It was time to make myself a treat.  I saw this brownie recipe on Facebook so many times I had to make them.  I was also going to be hanging out with my friend Julie from A Solitary Feast .  She was making us lunch and I was bringing dessert.  A gooey layer of caramel and chocolate between the layers of brownie was going to happen! 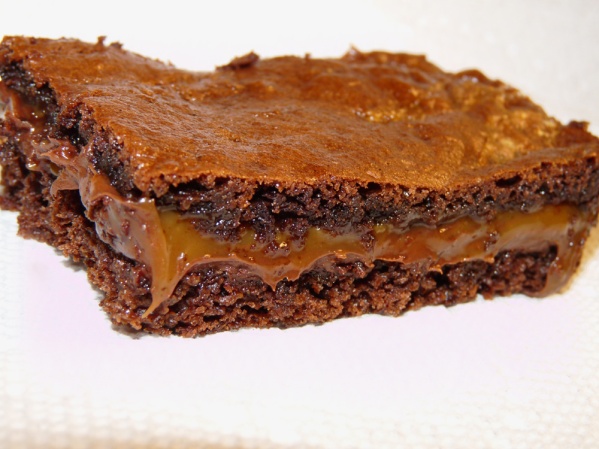 The blogger had given an excellent tip I had been planning on using already.  Instead of peeling a bag of caramels for the filling, she suggested using Kraft caramel bits.  I happen to have several bags in my pantry courtesy of my P.S. (Pantry Supplier/ hubby).  He’d bought them at Christmas time thinking I could use them for baking.  I only used one bag over the holidays so I was looking to use them in some way already.  As the blogger mentioned, they’re a great way to avoid the extra work.  But those come later!

I started by putting a stick of butter into a medium-sized mixing bowl into the microwave.  I set it on a minute and let the butter melt.  I added the box of Devils Food cake mix and a cup of evaporated milk to the bowl and plugged in my hand mixer.

Beat until mixed; batter will be very thick.

I beat the batter until it was mixed, scraping the sides of the bowl a couple of times.  It was a thicker batter as the blogger had mentioned. 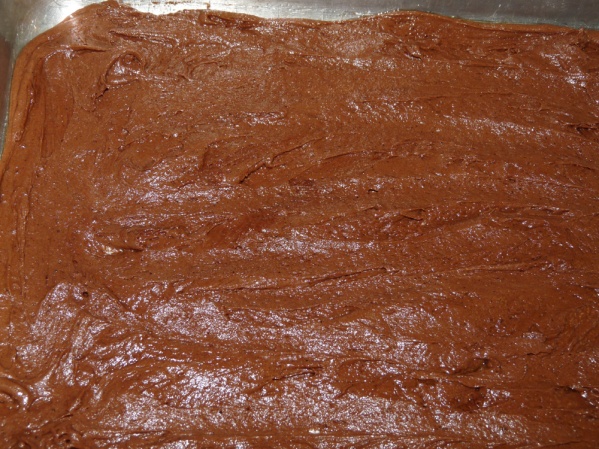 Spread half of batter into the greased 9×13-in pan

I’d sprayed a 9×13-in pan with cooking spray and now I spread half of the batter into the pan.  That wasn’t easy, the batter kept sliding all over.  I quickly checked the blog again for any tips and found nothing to help.  She’d mentioned not to worry about spreading the second layer over the caramel layer later, but nothing about the bottom layer.  I struggled on and got it as smoothly spread as I could.  All I can say is “good luck!”

Place bag of caramel bits and evaporated milk into a saucepan over medium heat.

The pan went into the oven for 15 minutes.  While the brownie bottom baked I turned to making the caramel sauce. 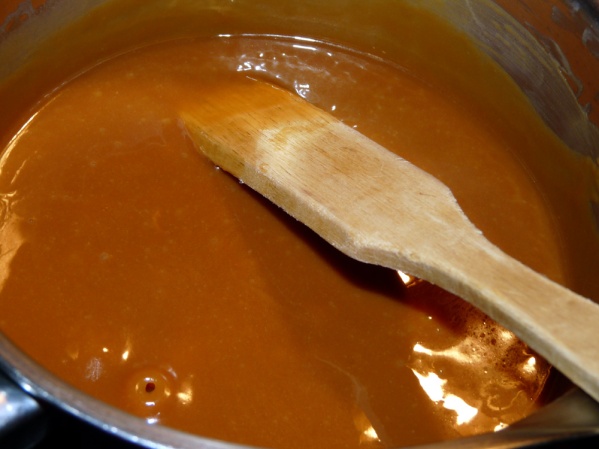 Stir 6-7 minutes until caramels are completely melted. Remove from heat and set aside.

I emptied the bag of caramel bits into a small saucepan along with the 1/3 cup of evaporated milk.  I stirred it over medium heat and it seemed to take forever to begin to melt.  It was only 7-8 minutes but I guess I was impatient.  It finally melted and was smooth, with no remaining little beads of caramel.  I set it aside.

The brownie bottom was ready to come out of the oven and I set it on a rack.  I opened the bag of semi sweet chocolate chips (I used Girardelli chips) and spread them evenly over the top of the brownie layer. 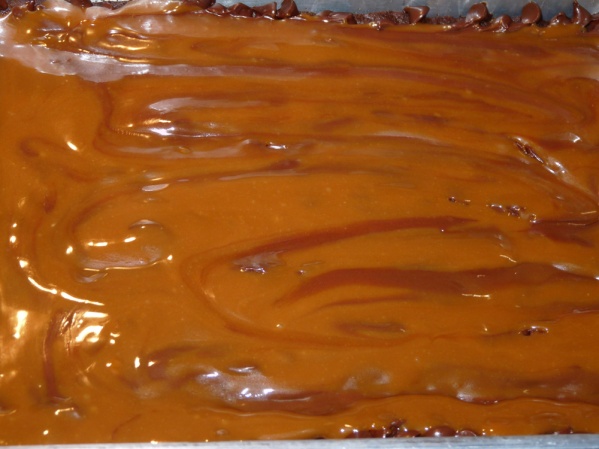 Next I drizzled the caramel sauce over the chips.  I used a small offset spatula to spread the caramel a little more evenly.

Lastly I dropped heaping tablespoons of the remaining brownie batter over the caramel layer.  I used the offset spatula again to smooth it out a bit.  I know the blogger said it would spread itself baking but I’m fussy that way.

Back into the oven went the pan and I set the timer for 25 minutes.  When the timer went off I toothpick tested the center and it was done.  The pan went on a rack on the counter to cool. 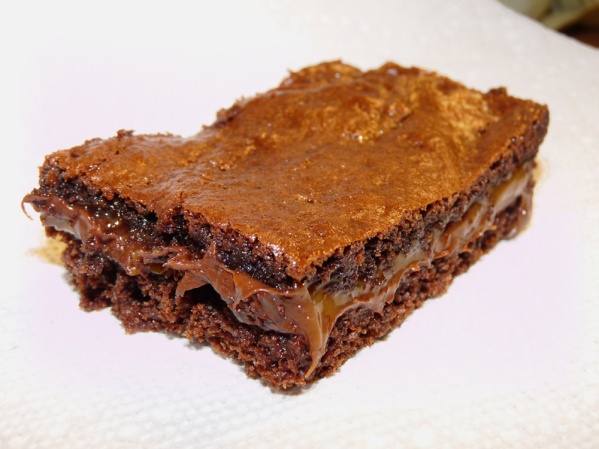 Several hours later I cut the brownies and put them into a storage container.  I was surprised at how easy they were to transfer to another container.  I’d thought they’d be all gooey and messy.  They were gooey for sure with the caramel filling, but the bottom layer was firm enough to support them.  Can you believe I didn’t even taste one that night?  I was taking several along the next day and I wanted to wait to enjoy them with Julie.

Rich!  Gooey!  Chocolate and caramel deliciousness!  These bars are so good I almost agree with the name the blogger gave them: Knock Ya Naked Brownies.  Although I didn’t use that name I could understand the concept after eating one.  I think they are better than brownies, hence my nickname for them.  Who knew you could take a cake mix and make an amazing brownie?  Well, now I know.  I will be making these again!

Brownies made from a cake mix, caramels and chocolate chips that are so yummy you'll love them!

Spread half of the batter into the baking pan, reserving the other half for later.  Bake for 15 minutes.

While the brownie bottom is baking make the caramel filling.  In a medium sauce pan over medium heat, combine caramels with 1/3 cup evaporated milk.  Stir frequently until caramel is melted and smooth.  Remove from heat.

Remove brownie bottom from oven after 15 minutes.  Sprinkle with 2 cups chocolate chips then drizzle with caramel sauce.   Drop teaspoons full of the remaining cake batter onto the caramel layer.  Spread lightly to cover all caramel spots.

Bake for an additional 25-30 minutes (until the center is set).

Adapted from The Country Cook

12 thoughts on “Better Than Brownies”