I used a jar of Ragu® spaghetti sauce to make dinner for the grandkids awhile back. It went against my standards but they like it. I was surprised to find I liked it too!  When I was at the grocery store recently I texted my daughter in law for the brand of the sauce. I’d forgotten already! I wanted to have a jar for a quick  dinner when needed.  Having a jar of sauce on hand we actually like will be golden.

I babysat the grandkids recently and after 10 hours I was exhausted.  I was too tired to think of dining out so my goal was to make this as easy as possible, with minimum tweaks.  I started by browning the ground beef we had leftover from grilling the previous evening.  It was a little over a pound and I sprinkled it with salt and pepper then fried it until it was nicely browned.

Brown beef in a nonstick skillet over medium high heat until caramelized in places for best flavor.

As I browned the beef I chopped up half an onion.  I also added 1/2 cup of red bell pepper I chop and store in the freezer when they’re on sale.  Of course you could add fresh pepper if you don’t chop and freeze them.

I let the onion and pepper cook along with the beef for a few minutes.  They just need a brief cook, they’ll cook more when the sauce simmers. 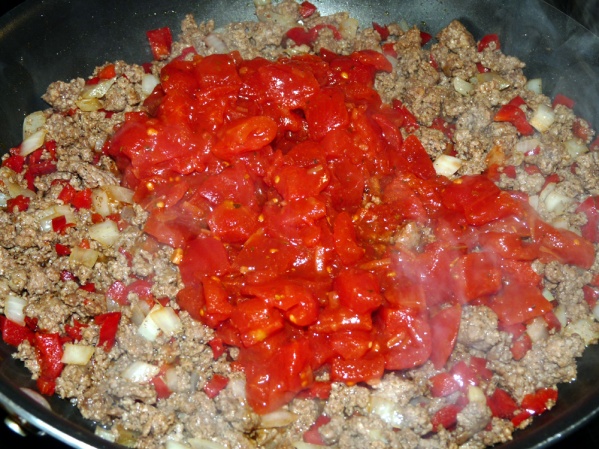 Add can of diced tomatoes

I opened a 15 oz can of diced tomatoes and added them to the skillet.  I know the jar of sauce is good and seasoned nicely, but I wanted some tomato chunks for texture.  That’s the one thing I think the jarred sauces are usually missing. 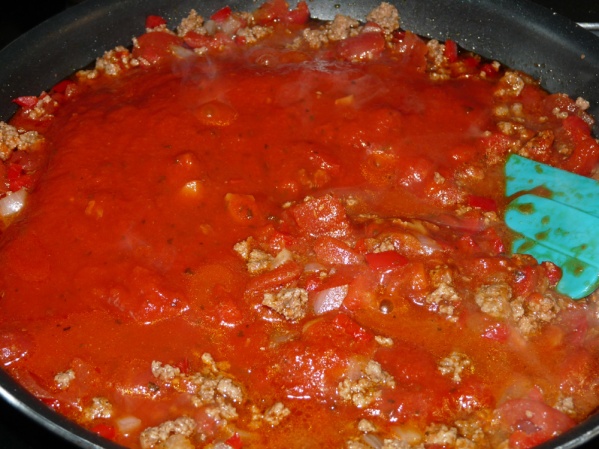 Finally I added the jar of sauce and stirred it all well.  It was soon bubbling away and I reduced the heat to medium low and let it simmer for about 20 minutes, just long enough to cook the pasta to al dente.

I used elbow macaroni for this dish instead of a spaghetti or angel hair pasta.  My P.S. was still out on his route and I didn’t know when he would return home for supper that evening.  I knew we could reheat an elbow macaroni dish in the microwave easier than we could one with the longer strands.  So the elbow mac was just in case he wasn’t home soon. 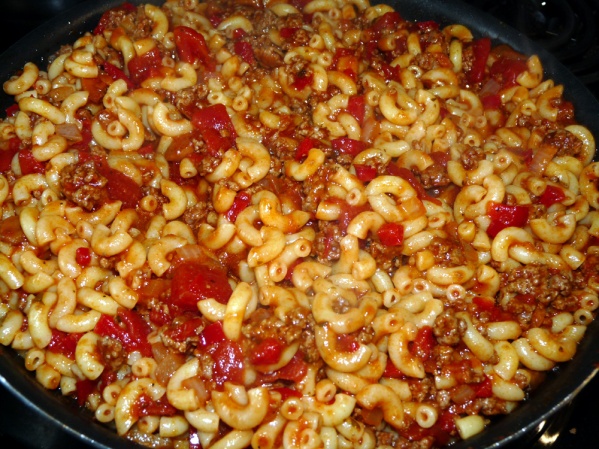 Stir and let simmer for several minutes. If the mixture becomes too dry, add cups of pasta water at a time.

Surprisingly, my P.S. was home soon.  In fact, he walked in the door right after I’d added the pasta to the meat sauce.  Talk about lucky timing!  He took a few minutes to get ready to relax over dinner while I let the elbow mac simmer and absorb the spaghetti sauce.  I added about a cup of pasta water when it got a bit dry.  I don’t remember which tv chef taught me that trick but I’m very thankful for it! 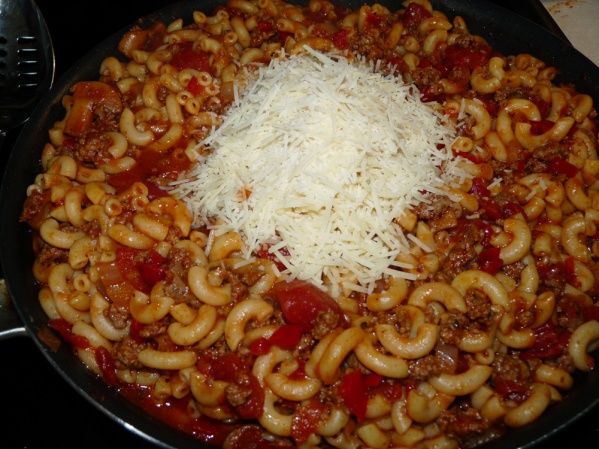 Add 1/2 cup of shredded Parmesan, stir and cook for several minutes until melted and blended.

I added a cup or so of shredded Parmesan to the dish, stirred again, let it simmer a couple of minutes then served dinner.

Excellent!  This was like spaghetti with different pasta!  So flavorful and it hit the spot that evening for dinner.  It was also excellent the next night, reheated in the microwave although it was slightly dry.  We could have added a little water to rehydrate it fully but didn’t bother.  I also just reheated it for lunch twice and was pleased.

I now have a quick meal using a jarred sauce.  I refused to be ashamed, it’s better than our usual frozen pizzas or dining out so often.  Is it weird that I’m tired of restaurants?  We aren’t a huge city with a lot of choices for dining, so we need a break from the places we have here.  And homemade is almost always better in my book.  Because.. leftovers! 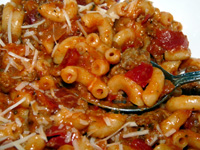 A quick way to make a flavorful spaghetti dish with a jar of sauce.

Brown beef sprinkled with salt and pepper in large nonstick skillet until nice and caramelized in places. Halfway through add onion and bell pepper and let cook with the beef, stirring occasionally.

Add pasta to skillet and stir well, allowing pasta to simmer and absorb sauce for several minutes. Add reserved pasta water if it becomes dry. As always, taste test and add salt and pepper as desired.

Stir in shredded Parmesan and serve sprinkled with more cheese if desired.

When you reheat, stir in a little water if the dish becomes too dry.