Spaghetti squash is one of the fun vegetables.  It looks like nothing you’d expect to find lying in wait under a hard skinned, elongated, gourd-like… thing!  It tastes like squash, but looks something like strands of spaghetti.  Every time I open one up I’m amazed all over again that it contains shreds of.. vegetable!  And it’s so versatile I still have dozens of ways I want to try to make it into a dish.

I don’t remember if using spaghetti squash in chow mein was my idea and I went searching for a recipe, or I found the recipe and decided to make it my idea.  I do know it’s now on my list of Eat More Often.  This was not only fun, it was delicious!  Chow mein is usually made with a handful of strange ingredients that work in a good way when garnished with soy sauce.  This recipe is sort of like that.  It worked. 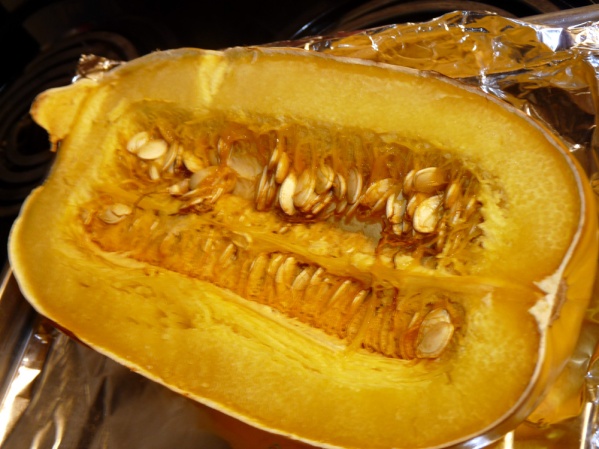 I started by asking my P.S. (Preparer of Squash/ hubby) to cut the squash in half that he’d brought home.  Then place the halves cut side down  on a foil covered baking sheet and roast them at 400°F (no oil necessary).  I would time them and remove them from the oven when they were done.  I test that by simply sticking a fork in it.  If it goes in easily, it’s done. 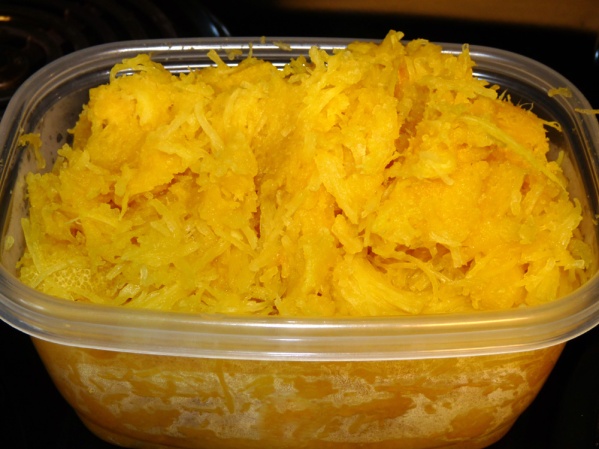 After storing the spaghetti squash in a container overnight, I made my new chow mein recipe the next evening.  I had the bulk of the recipe done this way and the rest was just throwing the ingredients into the skillet.  I made the sauce with soy sauce, garlic, brown sugar, ginger and pepper (I didn’t have white pepper so I used black pepper).  I whisked the sauce and set it aside. 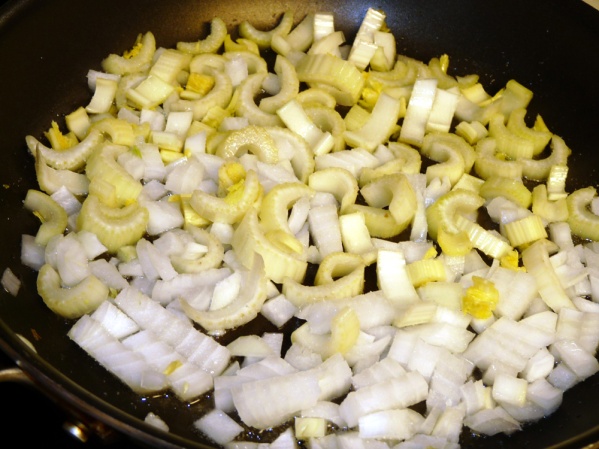 In my large nonstick skillet I heated a good drizzle of olive oil and sautéed the chopped onion and celery for several minutes, until it was beginning to turn translucent.

I added the chicken and continued to cook it along with the vegetables, stirring often, for several more minutes.

When the chicken was no longer pink I added the cole slaw mix and the sauce and stirred it well.

When the mixture was heated through and the cabbage was mostly wilted, I taste tested for seasoning and added a little more soy sauce and salt. Add just a little at a time, to prevent being overly salty. 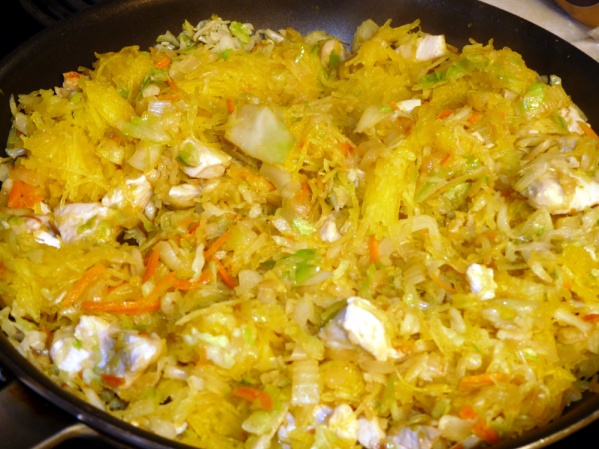 Finally I stirred in the spaghetti squash and let it cook several more minutes til heated through, stirring occasionally.

My chow mein was ready to serve!  We really enjoyed the flavors and I was happy with the ease with which it came together so fast.  Preparing the spaghetti squash ahead of time was the smart way to handle the process.  And I had plenty of squash leftover for another recipe or two.  The original recipe didn’t contain a protein, it was more of a vegetarian dish, more of a side dish.  I added the chicken to make it a full meal and that was a wise idea.  If I do say so myself! 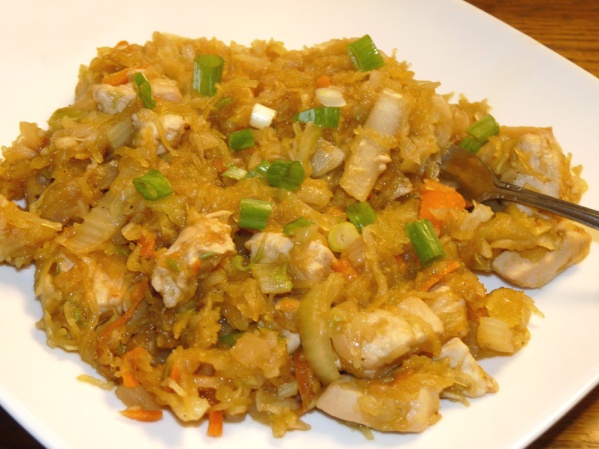 We loved the flavors that evening as well as reheated for another meal a few days later.  I should note that I added chopped green onions as a garnish for photo purposes, to make the chow mein prettier.  Although the green onions did lend a nice touch to the flavors as well, you could add or omit as desired.

Cut a spaghetti squash in half length-wise and place it cut sides down on a foil covered baking sheet. Place in a preheated 400°F oven for about an hour. Stick a fork into the skin and if it enters easily, your squash is done. When cool enough to handle, remove center mass of seeds and slimy strands and discard. Scoop out squash strands and place in a container. Cover and refrigerate if not using immediately.

Heat olive oil in a large skillet over medium high heat. Add onion and celery, and cook, stirring often, until tender, about 3-4 minutes.

Add chicken and cook for several more minutes, until the chicken is no longer pink.

Stir in cabbage until heated through, about 3-4 minutes.

Stir in spaghetti squash and sauce mixture until well combined, about 2 minutes.

Adapted from Little Bits of Real Food and Real Talk