It was a dark and stormy night… no, really it was.  There was a lot of wind, blowing snow, and I was not in the mood to dine out with my P.S. (Personal Shopper/ hubby).  I had a head of cauliflower that needed to be used and a desire for soup.  But I was lazy so I searched the freezer for packets of frozen diced peppers and celery.  Half of my work was done! 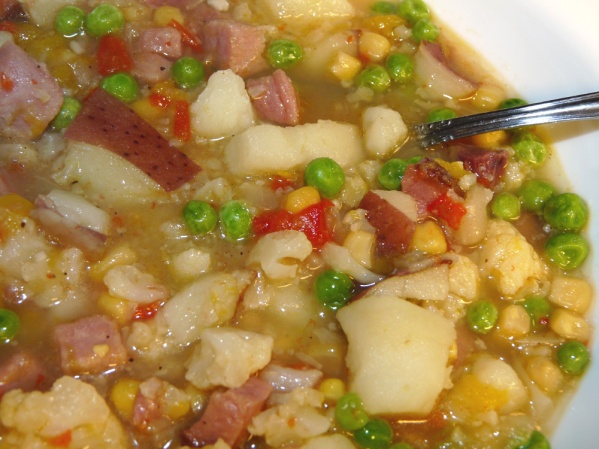 I love cauliflower but have never found a soup I liked that was mostly cauliflower.  But cauliflower does plays well with others so if I throw in enough other vegetables, I end up with a soup we like.  It’s mostly cabbage-like in flavor and I do add cabbage to many soups for that special touch.

Sauté onions until they begin to turn translucent.

I started my soup by dicing up some onion.  I sautéed it with a drizzle of oil in a small soup pot.

When the onion was beginning to turn translucent I added the frozen peppers (yellow and red this time, any color would do) and the frozen celery.  I freeze celery when it’s been around awhile in the fridge, complete with the leafy tops, for soup situations just like this.  I let the peppers and celery thaw and cook for a few minutes.

I added garlic, letting it cook for a few minutes then added 4 cups of chicken broth to the pot.

Next I dug back into the freezer for the bags of diced ham I’d frozen after we cooked a large ham awhile back.  It was about 3 cups or so of ham and perfect for this soup.  I was beginning to wonder if I should name this Freezer Soup!  I added the diced ham to the pot along with some chicken broth.

I added a couple of handfuls of diced potatoes to the pot of soup.  I decided to call it “rustic” and left the peelings on, scrubbing them well before I diced them into about 3/4″ pieces.  I let the soup come to a bubble then reduced the heat to medium low and let it simmer for about 10 minutes.

While the soup simmered I cored and chopped the head of cauliflower roughly into 1″ pieces.  After the soup had simmered 10 minutes I added the cauliflower and a can of corn to the soup and again let it come to a boil.  I reduced the heat and let it simmer another 20 minutes.

Finally I added about a cup of frozen peas, taste tested for seasoning and added salt and pepper to taste.  When the peas were heated through the soup was done.

The soup had nice flavors: the ham added a smokiness to the broth and the vegetables were a nice blend.  I often add cabbage to my soups for extra flavor and cauliflower being in the cabbage family lent a nice touch.  It was delicious and satisfying.  It was a good soup for a dark and stormy night.

A hearty vegetable soup with ham using a head of cauliflower.

Sauté onion in a good drizzle of oil in a soup pot until translucent.  Add peppers and celery and sauté another 2-3 minutes.  Stir in garlic and cook for a minute or two.

Add broth, ham and potatoes and bring to a boil. Simmer for 10 minutes on medium low.

Add cauliflower and corn and again bring to a boil. Reduce heat and simmer for 10-15 minutes.

When peas are heated through, soup is ready!