I normally make Swedish meatballs around the winter holidays but we’d just had a big meatball feed.  While my daughter, son, cousin and I made our yearly lefse, I had a crockpot of meatballs and another crockpot of mashed potatoes going for our dinner break.  There were leftovers for a couple of days so I had my craving sated for a few months.  Time for some new meatballs for our Christmas lunch.

I saw the Juicy Lucy meatballs on Pinterest and was interested.  I didn’t want to make them super spicy, so I tamed them down.  I felt bad as it was a paid post on a blog by a maker of hot sauce.  But then again I wasn’t eager to burn my tongue.  I just was in the mood for a meatball with a melted cheesy center, dipped in a flavorful sauce.

I thawed 3# of ground beef and tripled the recipe.  And of course I modified the recipe right off.  I like to use oatmeal in my meatballs and meatloaves.  I feel oatmeal maintains the feel of ground beef rather than using bread crumbs or torn bread.  I also had to omit the minced onion as some family members can’t handle onion.  The flavors are still fine without onion, use at your discretion.

My P.S. flattens a mound of ground beef, tucks a cube of cheese in the center and seals it up into a ball.

I had my P.S. helping mix and prepare the meatballs about a week before Christmas.  I was feeling under the weather and mostly supervised the mixing.  My P.S. put the ground beef into a large bowl, added egg yolk, oatmeal, Worcestershire, salt and pepper.  He totally missed me telling him to use some hot sauce but that was ok.  As I said, I didn’t want them super spicy anyway.  The sauce would be spicy enough.

He used his hands to mix the ingredients well, then set the bowl in front of me.  I used my large cookie scoop to form balls, placing them on a plate.  My P.S. formed them into a flattened patty, tucked a cube of cheese in the middle, then formed a meatball by rolling it in his hands.  When I had all of the ground beef formed into balls I helped him form the meatballs and tuck the cheese inside.

The recipe said to use processed cheese and although I do use it in rare cases, we preferred to use a regular cheddar cheese.  When we ran out of that we used a mild cheddar.  With 3# of ground beef we ended up with about 60 meatballs, so about 20 meatballs per recipe.  The original recipe said it made 15 meatballs so we maybe made them a little smaller and yielded more.  Be aware your numbers may vary as well. 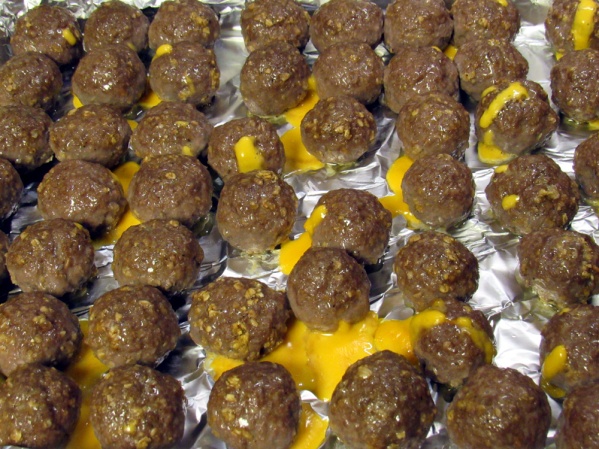 Bake for 15 minutes. There will be some cheese oozing out but plenty still inside.

We stored the meatballs between layers of waxed paper in containers in the fridge overnight since the oven was busy roasting a turkey.  The next day I heated the oven and roasted the meatballs spread apart on a foil-covered half sheet pan for 15 minutes.  As the recipe warned, some of them did leak, but not a lot.

When meatballs are cooled place in zippered bag and freeze until used. Or add to crockpot with sauce and set temperature to low to keep warm.

I let the meatballs cool then placed them in a zippered freezer bag for Christmas.

The day before Christmas I took the meatballs out of the freezer and placed them in the fridge to thaw.  On Christmas Day I started early in the morning, preparing a sauce for my Juicy Lucy meatballs.  I made my own barbecue sauce in a crockpot.

Add barbecue sauce of choice to crockpot or use my recipe.

I added the meatballs and set the heat to low. They had 3 hours to heat through before dinner. Unfortunately I forgot to use a crockpot liner.

Add meatballs to crockpot and stir to coat. Heat on low, stirring occasionally.

The amount of sauce was enough to coat the meatballs, not drown them.  I stirred the crockpot several times as they cooked to keep them all coated in sauce.

Eventually the meatballs heated through and the cheese began to once again ooze out.  They were done and ready to eat.

The meatballs were super!  Moist, full of melted cheese and delicious!  I actually had a few leftover since I had so many dishes on the buffet.  I microwaved a few for lunch a couple of times.  The were excellent even leftover!

Preheat oven to 400°F. Line a baking sheet with foil and spray with cooking spray.

Divide beef mixture into 15 pieces. Roll each piece into a ball and tuck the cheese cube inside, sealing it as best you can.

Bake 15-18 minutes. (Some cheese will leak out- there will be more left inside)

Combine sauce ingredients in a lined crockpot and add meatballs. Stir to coat. Simmer on low setting for 2-3 hours.

Adapted from Spend With Pennies

One thought on “Juicy Lucy Meatballs”