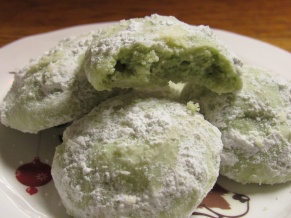 The flavor was good and the consistency was right, even in their altered state.  I probably won’t make them again so I won’t be able to tell you what the secret was to keep them in ball form.  I do want to post the recipe because they did taste good and it was a good idea to use a pudding mix to create the flavor.  I wonder how other flavors of pudding such as cheesecake or lemon might taste as cookies.  Ok maybe I might try them one more time.

In a large bowl I beat the butter until it was smooth and creamy.  I added half a cup of powdered sugar and beat again until mixed.  I beat in the vanilla next.  In a separate bowl I whisked the flour, pudding mix and salt, then gradually added it to the wet ingredients with the mixer. 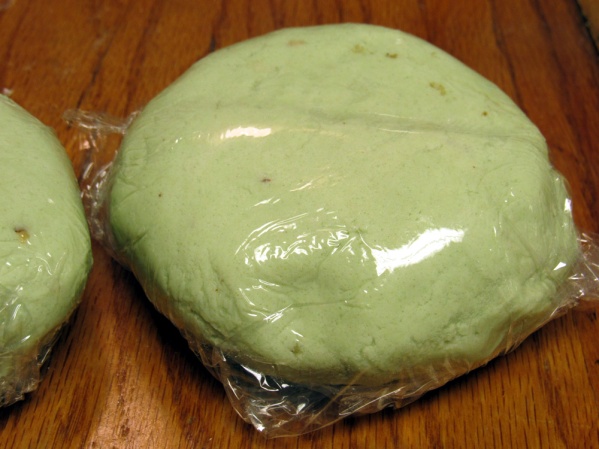 Divide dough into two balls and wrap each in plastic. Refrigerate at least an hour.

I divided the dough into two balls and wrapped each in plastic wrap.  Into the fridge they went for about an hour, as advised.

Form each ball into 18 balls and spread on a parchment paper covered baking sheet.

After an hour I preheated my oven and took one of the balls of dough out of the fridge.  I scooped the first ball into 18 balls.  I rolled them in my hands quickly and placed them on a parchment covered baking sheet.  So far, so good.  I’d followed the directions exactly.

I baked the cookies for 10 minutes, also as directed.  As I watched them spread out like a puffy cookie, I was feeling less confident by the minute.  What did I do wrong?  I know it’s important to make sure the dough is chilled enough when making some kinds of cookies.  I think these should have maybe been chilled again after rolling in balls, like another recipe I made this season for cookies.

Bake 9-10 minutes, until the bottoms are just beginning to turn brown.

First batch baked, I let them cool on the pan for a few minutes placed them on a rack to finish cooling.  I slid the second pan into the oven when they were ready and crossed my fingers.  Again they spread and ended up puffy cookies, not balls.  Drat.

I coated the cookies in powdered sugar and placed them in an airtight container.  We sampled a cookie and really liked the flavor.  As I mentioned previously, tasting them and knowing the flavor was from pudding made me wonder how many other flavors would work in the cookies.

The cookies were a firm bite and looked great if you didn’t know they were supposed to be balls.  Their texture was actually just like I’d have expected if they’d turned out round instead of flattened.  My pistachio wedding cookies were the wrong shape but their flavor and texture was spot on.  I wouldn’t call them a fail, just merely a bit of a disappointment.

When I looked back to the blog (listed below) were I got the recipe, her cookies weren’t totally round either.  They were more round than mine, though.  She must have done something a little differently.

Give your usual wedding cookies a new flavor: pistachio!

Divide dough in half and form into two balls. Wrap each ball in plastic wrap and place in refrigerator for at least an hour.  We’re using two balls so that the second ball of dough can remain cold.  This prevents spreading.

Remove one ball of dough from fridge, remove plastic wrap and make teaspoon sized balls. Place on baking sheets and press down on the balls slightly spacing them about 1 inch part.  18 balls should easily fit on each of the two lined baking pans.

Bake in preheated oven for 9-10 minutes. Don’t overbake. Remove from oven and let them sit on baking sheet for about 5 minutes. While cookies are still warm toss them in remaining confectioners sugar and set on wire rack until cooled completely.