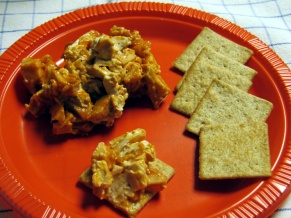 My Mom found a recipe years ago and made it each year for our Christmas Eve buffet.  We’d open our gifts then take a break and enjoy a wide array of finger foods and of course sweets.  My Mom was and still is an excellent cook.  Her holidays and parties are legendary.  When I had my own family, I had to call home for recipes.  The internet didn’t exist and letters just weren’t fast enough.  I needed access to Mom recipes!

I’ve continued many of the traditional dishes including Mom’s cheeseball and an imitation crab dip that we can never get enough of.  I really should triple the dang recipe so that we can all take a bowl home!  I posted it, sort of, a few years ago when I made the dip for a Halloween party.  I turned it into Bloody Brains.  Same dish, different presentation.

Dice krab into 1/2″ pieces or less

It’s as simple as can be to make imitation crab dip unless you go the route and make your own cocktail sauce.  Not necessary, but sometimes I like to do the total homemade thing.  Or I forget to buy the bottled stuff and don’t want to run to the store one more time.

Place krab in a zippered storage bag if not immediately assembling dip.

I usually thaw and chop the imitation crab a day or two in advance.  I store it in a zippered bag in the fridge until I’m ready to assemble the dip, right before serving. 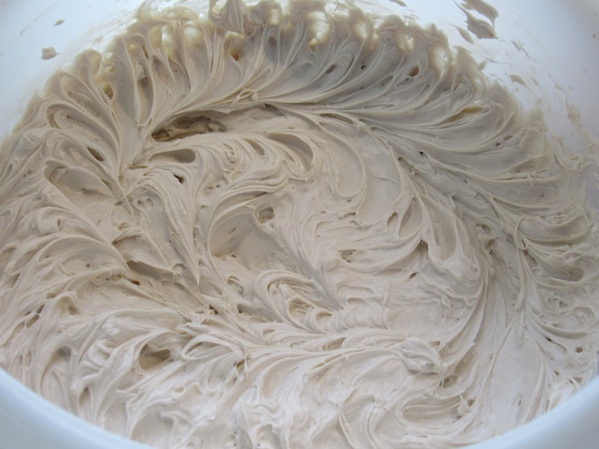 I add the Worcestershire and milk to the bowl of cream cheese and beat again until I can tell by the color of the cream cheese that it is evenly mixed.  It turns a sort of beige. 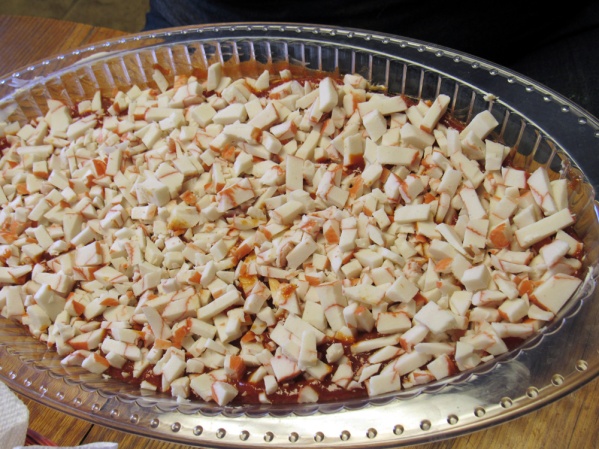 Spread cream cheese mixture over bottom of platter or serving dish. Cover with one bottle of cocktail sauce or 1 1/2 cups of homemade sauce. Spread sauce evenly then layer crab over top.

I empty a bottle of Heinz cocktail sauce, or half of my batch of my own version of the sauce (listed below), over the cream cheese layer and spread evenly.  I layer the crab over the cocktail sauce.

I empty a second bottle of Heinz cocktail sauce, or the other half of my own sauce, over the imitation crab.  That’s it!  I cover it with a lid or plastic wrap and refrigerate until we’re ready to set up the buffet.

As we serve ourselves, the 4 layers get mixed and joined together and later when it’s spread on crackers as we eat.  I prefer to eat the dip on Wheat Thins or Ritz Crackers.  Others prefer Triscuit or Vegetable Thins.  We also like the new Townhouse Pita Crackers in various flavors.  This dip is good on anything you like, including on a slice of cucumber.  It would probably even be good on a celery stick but I refuse to go there.  I dislike celery.

I’ve found that this imitation crab dip appeals to all ages, from the great grands to the youngest grandchildren.  Even little Oliver, who is 18 months old, can’t get enough of it on a Wheat Thin.  He does the ASL motion for “more” over and over when he sees this dip or spinach dip, his other favorite.

The dip will last a week in the fridge.  We don’t often have it that long, so I can’t pinky swear how long it lasts.  You could cut the recipe in half if you’re not sure what amount you will need.  I’ve never made less than a double batch and that is the recipe I posted.  I will curl up with a bowl of dip and a box of crackers and do time on the couch watching tv.  I call it a meal sometimes. 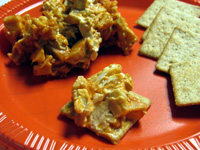 A cream cheese base topped with diced imitation crab and cocktail sauce. Spread on crackers and swoon.

Beat cream cheese with an electric mixer until smooth.  Add Worcester and cream and beat again until well mixed. Spread on a flat dish or platter.

Mix together and store in a container in the fridge until used.

This recipe yields a little more than the equivalent of 2 bottles of store-bought cocktail sauce.  Use it all, it’s not too much.