I had a wild idea… which is how most of my stranger recipes are born.  I wanted a meaty, Mexican sauce with corn tortillas cut into noodles.  I thought of it as Mexican Spaghetti, although it could also arguably be called Deconstructed Tortillas.  Let’s go with Spaghetti, as that makes it more fun.  Trust me, in North Dakota in January, when our high was -34 today, we needed to make some fun. 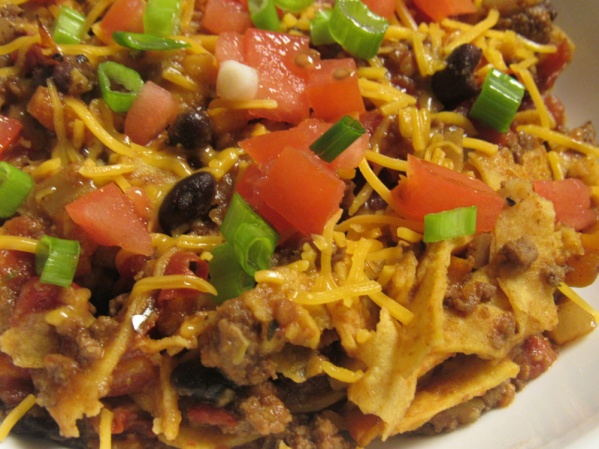 I had to keep reminding myself of the Mexican flavors.  As I seasoned the meat sauce I almost forgot to use my favorite spice, cumin.  And of course I added chili powder.  I buy it in the large, cheap containers and it’s a bit salty.  I don’t add extra salt to a recipe until the end, when I can taste how the chili powder has added salt to the dish.  Play it safe. 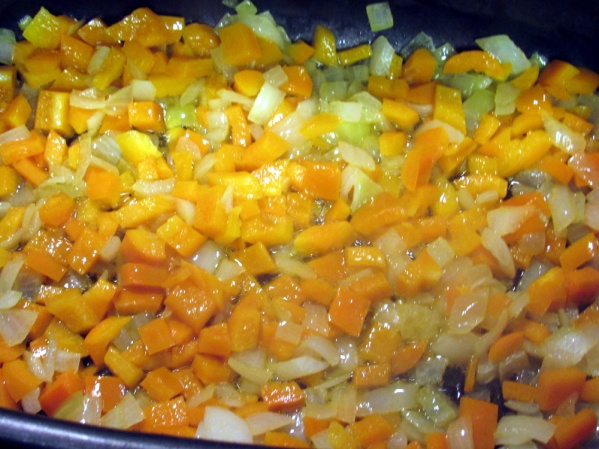 Sauté onions and peppers in a drizzle of oil in a slow cooker insert that can be placed on the stove or a large nonstick skillet over medium high heat.

I started with sautéing some onion and some orange sweet bell pepper for a few minutes.  I used my Westbend slow cooker insert that can be used on the stove as well as on its heating base.  That made this dish a one pot meal for me.  If you don’t have one of those, I’ve given directions for using a skillet for browning then finishing in a crockpot.

When onion and pepper begins to turn translucent, add ground beet and continue to cook until beef is browned. Break the beef into small pieces as it cooks.

I added the ground beef to the pot and broke it up into small pieces as it cooked. 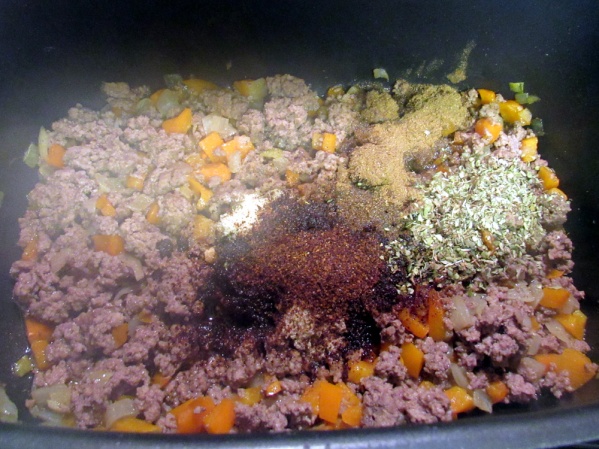 The spices were easy: basic chili powder, cumin, garlic and oregano. You could eyeball them or actually use a measuring spoon, whichever way you like to cook. I’m an eyeballer. 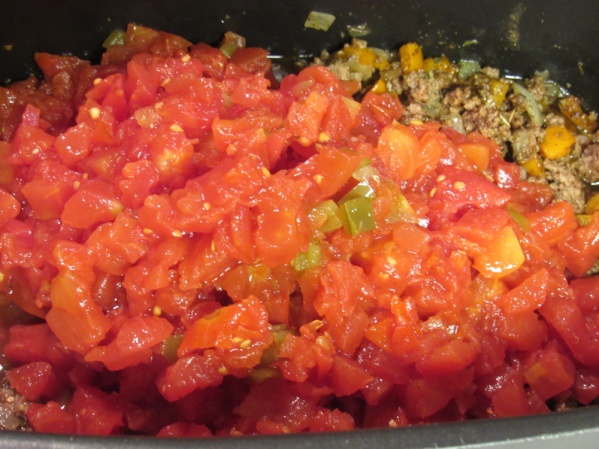 Add tomatoes and tomato paste. Stir well. If using a skillet, pour into crockpot and cook, covered, over high setting for one hour.

I had several cans of rotel tomatoes, with green chilies already added.  I used 3 cans.  You could substitute regular diced tomatoes and throw in a small can of green chilies if you don’t have the rotel ones.  I also added a big squirt (called 2 tablespoons in real chef-speak) of tomato paste to the pot for extra tomato flavor.  You could use regular tomato paste or the concentrated kind, as noted in the recipe.

Stir in black beans and bring to a bubble if using an insert. Place on heating base and cook for an hour, covered, on low heat.

Finally I added a can of black beans.  If I’d been making a true spaghetti sauce (called a Bolognese in real chef-speak) I’d have added diced black olives.  I smirked as I added the black beans to my sauce, knowing they were also black and followed my idea.

I brought the meat sauce to a bubble then placed the insert on its base.  I set the heat for low and let the meat sauce simmer for an hour.  It could have simmered for a couple of more hours if you wanted to delay serving but an hour was plenty.  Our dinner time approached.

After one hour taste test for seasoning, adding salt and pepper as desired. Carefully stir in tortilla “noodles” and serve hot with garnishes of choice.

I’d already cut the smaller corn tortillas into strips.  My strips were a bit wider than spaghetti noodles.  They weren’t as easy to cut as I’d expected because my knife needed sharpening.  I did try my pizza cutter but that was even duller than my knife.  I wondered vaguely how one sharpened a pizza cutter, or if you just bought a new one.  This one was pretty sad, I’d ask my P.S. (Personal Sharpener/ hubby) to deal with it.

When my sauce was fragrant and ready I taste tested and did add a bit more salt and some black pepper.  I stirred in the tortilla strips carefully and served it up in my favorite pasta/soup bowls.  I garnished my Mexican Spaghetti with diced tomatoes, green onions and some shredded strong cheddar cheese.  It was so well garnished you can barely see the corn tortilla noodles!

We really loved the flavors of the sauce and noodles together.  My P.S. said a lot of “mmmm”s and afterwards said it was excellent.  The next night we microwaved it and loved it all over again.  It really is nothing like spaghetti but it was a new way to serve up Mexican flavors! 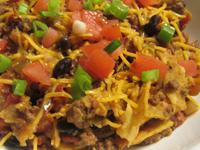 For a one pot meal: use a slow cooker or crock pot insert that can also be used on the stove.  Otherwise use a large nonstick skillet and a drizzle of oil on medium high heat.  Sauté the onion and peppers for several minutes, until the begin to turn translucent.  Add the ground beef and saute for several more minutes, until it is all browned.  Break ground beef into small pieces as it cooks.

If using a skillet, transfer onion and peppers to a crock pot or slow cooker.  Add seasonings, tomatoes, tomato paste and black beans to crock pot and stir well.  Set on high and cover with lid.  Let cook for an hour.

If using a crock pot insert, add seasonings, tomatoes, tomato paste and black beans to insert and stir well.  Bring to a bubbling boil, then place insert on crock pot base.  Cover and simmer on low setting for an hour.

Cut corn tortillas into spaghetti sized strands with a knife or pizza cutter.

After an hour, taste test sauce and add salt and pepper to taste.  Carefully stir in tortilla “noodles”.

Serve with garnishes of choice.

This is also good reheated the next day, even though the noodles have fallen apart!