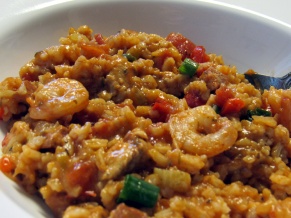 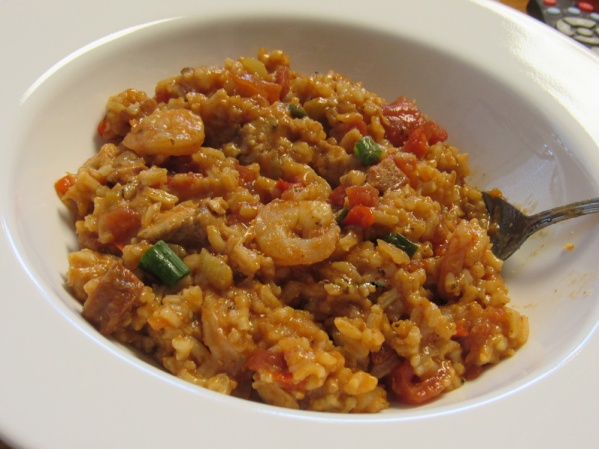 Basically my 3.0 version is adding chicken as a third protein to our Mardi Gras Jambalaya.  I admit having taken a few years off in making one of my favorite dishes of all time.  Why?  Perhaps because Mardi Gras usually sneaks up on me.  By the time I remember to look up the yearly event on a calendar I don’t have enough time to shop and thaw and make the dish correctly.

This year I wasn’t so alert, as usual.  But with a quickly written shopping list I bought shrimp and dumped them into water to thaw.  Why cold water?  There’s some chemistry reason that method works faster than just thawing on the counter that eludes me.  The water bath has worked well in the past so I continue to use it.

I pulled three boneless, skinless chicken breasts out of the freezer and partially thawed them in water as well.  I diced them while still half-frozen, which worked out nicely.  They sort of diced more easily when partially frozen anyway!

I’d picked up 2 red sweet bell peppers at the store and while I waited for my shrimp and chicken to thaw I cleaned and diced them up finely.  Although jambalaya is a fairly easy dish to make, the prep work (all the chopping!) takes awhile.  I noticed it was a little over an hour to chop everything.  Wow.  Now I wish I didn’t know that.

I like to have green onions on hand, I use them in so many dishes.  My previous stash had been in the fridge for over a week and needed to be tossed out.  Such a shame but I’d had a cold and didn’t cook much last week.  I chopped up 3 bunches and added put them into my usual container for later.

I chopped up 2 medium onions while I waited for the thawing proteins.  I diced them finely, so they wouldn’t be real obvious in my rice dish.  Aware that I would be giving a large container of jambalaya to my son and his family, I knew the kids were happier eating things like onions if they can’t see them.

I next chopped up celery.  It’s not my favorite vegetable so again I chopped it into smaller pieces.  The flavor is necessary for a good jambalaya but it doesn’t have to hit you in the face in large chunks.

Dicing the andouille sausage is your choice.  I’m a wimp about spicy foods so I like it in smaller pieces.  You could just slice the sausage into 1/2″ pieces for a more traditional look.  I’m a dicey spicy sausage person.  heh.

When the shrimp was thawed I checked them for any remaining tails.  I buy cooked shrimp, and add it last.  It has to just heat through so it doesn’t get rubbery and unpalatable.  You could go the raw route and even devein and remove the tails.  You’d just need to cook them a little more at the end.  I’ve done that some years.

Lastly I diced up the semi-thawed chicken.  It’s best in about 1″ cubes.

Food all prepped, it’s time to begin the jambalaya!  I should note that I doubled the recipe so my pictures have larger amounts than the single recipe would.  It also took longer to dice than usual.  A lot longer. 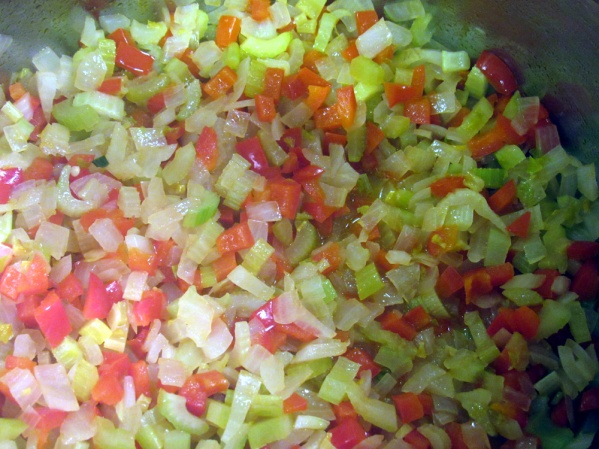 I heated a large soup pot with a couple of  tablespoons of canola oil.  I added the “holy trinity” of onions, celery and peppers and stirred well.  I had the heat on about medium; you’ll want to watch it because it can cook faster than you think.  Stir often. 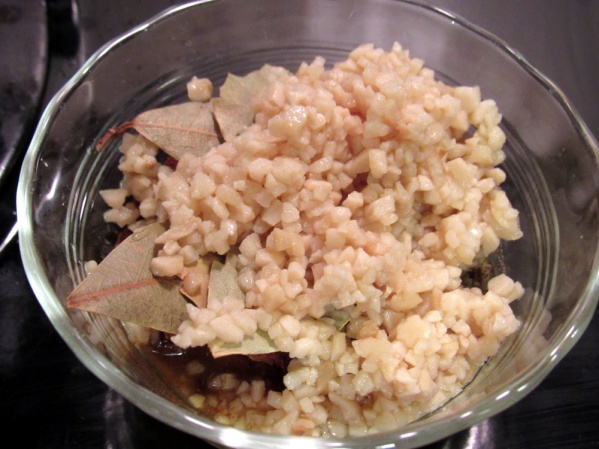 When the onion is translucent, add the spices and stir well.  Let cook for 2-3 minutes. 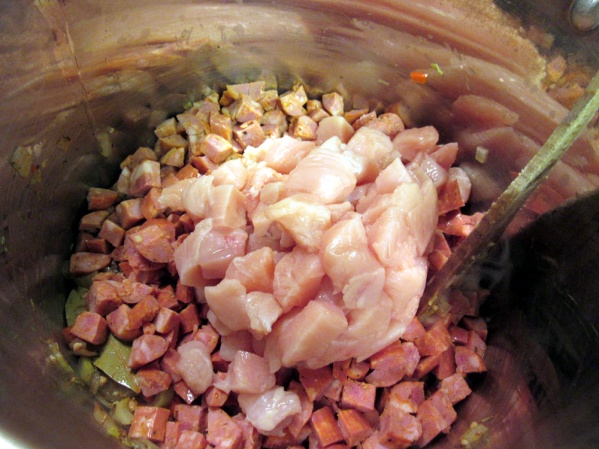 Add the andouille and chicken and let them sauté for about 10 minutes, stirring occasionally. 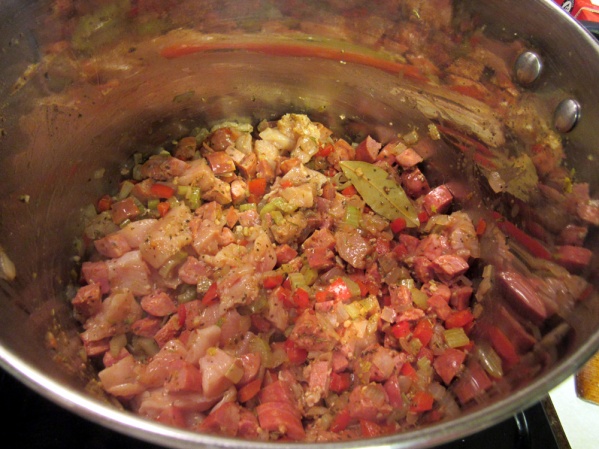 A quick note: I’ve never tried the cajun version of jambalaya since I really like the creole tomato version.  I’d hate to go through all the time and expense and find it wasn’t what I wanted.  Jambalaya is a fairly high priced dish to make with all the meats and shrimp. 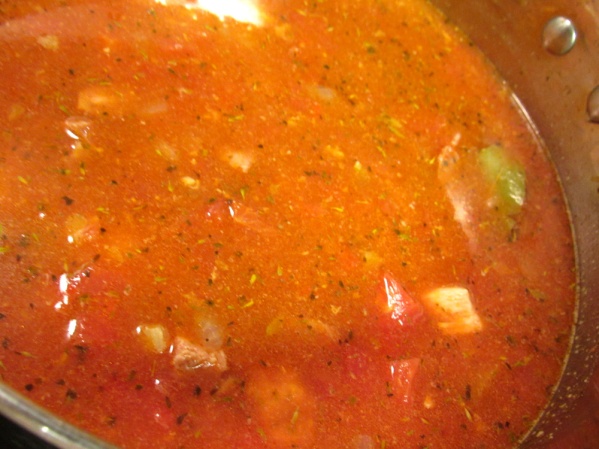 Time for the liquids!  Add the broth and diced tomatoes and bring the pot to a boil.  I cover the pot and it heats faster.  Stir in the rice, cover the pot and reduce heat to just above the low notch.  Let the pot simmer for 10 minutes.

After 10 minutes stir the jambalaya well and simmer another 15 minutes, covered. 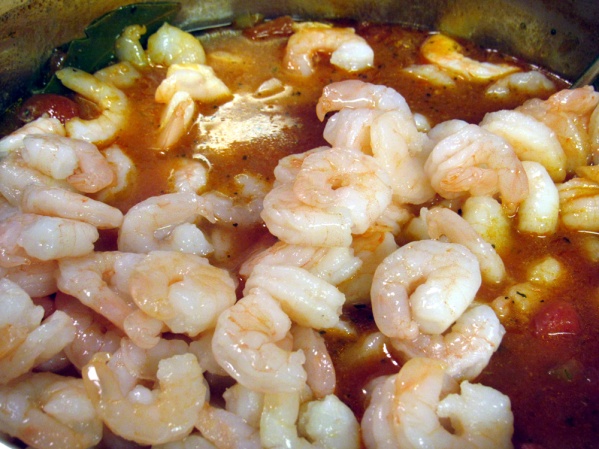 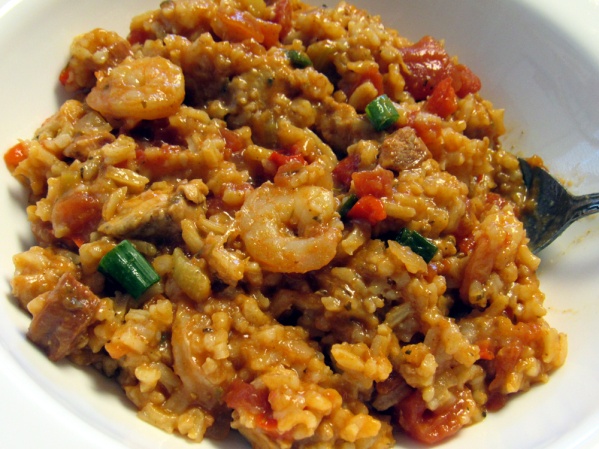 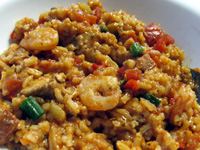 Add diced andouille and chicken and saute about 10 more minutes.

Add chicken broth and tomatoes. Bring to a boil. Add rice and stir well. Cover and cook over lowest temperature for 10 minutes. Stir well. cover and cook another 15 minutes.

Add the shrimp. Cover, remove from heat and let stand for 10 minutes. 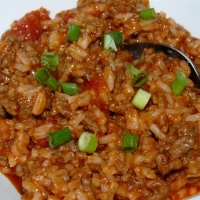 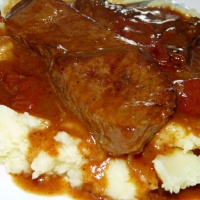