As the goal of my blog is to record favorite family recipes. I should be ashamed of myself for not getting around to posting our Cheesy Hash brown Casserole.  When we discovered the recipe back in the 80s we made it on every holiday.  It wasn’t a holiday if we didn’t have cheesy hash browns on the buffet (we’re buffet people on holidays).  We scraped every last morsel out of that large casserole dish and rarely had leftovers.  This dish was important eatin’!

Eventually we drifted off to other favorite dishes like Broccoli Rice Casserole and Cheesy Carrots and the potatoes didn’t happen every holiday.  Actually, I don’t think I’d made the casserole for about 10 years.   I couldn’t even find the recipe but after an internet hunt on Pinterest I found a recipe by Miss in the Kitchen that was fairly close and it didn’t include using canned soups.

When the coronavirus limited us to Easter at home this year, it was time to call on old family favorites to make a meaningful meal in a not so perfect situation.  I gave my P.S. a list of groceries and he ended up calling me from the store:  Are you serious about all these has browns?  he asked.  Yes, I replied, we want lots and lot of potatoes.

We were having Easter dinner with our son’s family and I knew the kids would steam through them fast.  Unfortunately my son said he was making a big hash brown casserole and I didn’t make it for Easter.  I made it the next week to go with our leftover ham.  We’d made a ham, my son made two.  Apparently we wanted lots and lots of ham leftover.

This dish is great as a side.  You could also add ham and make it a meal dish.  I’ve done that and added a green side salad for a tasty dinner.

In a large bowl I place the package of hash browns and diced onions.. 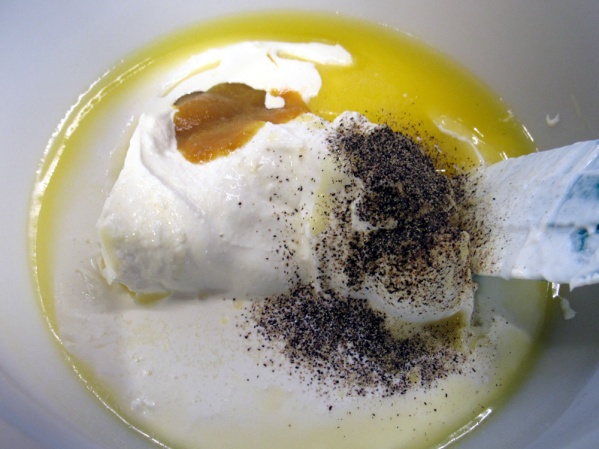 In a separate bowl I added the bitter and melted it in the microwave then added the sour cream, heavy cream, chicken base, pepper and salt.  I stirred well then poured the mixture into the bowl of hash browns and onions.

After stirring well, I poured the mixture into a 9×13-in pan that I’d sprayed well.  Into the preheated oven it went and I set the timer for 1 hour.

After baking for an hour the casserole was browned and oh so fragrant.  I served it for dinner with leftover ham and we were pleased.  The sour cream makes it taste somewhat like a baked potato loaded with toppings.  We had leftovers for a couple more meals and that’s always a bonus!

Warm and cheesy hash browns perfect as a side dish..

Scrub potatoes, peel and shred if using whole potatoes.  Squeeze out excess liquid and place in a large bowl.  If using frozen hash browns, add to bowl along with onion and 6 ounces of shredded cheese.

Pour into a greased 9 x 13-in baking pan and top with remaining cheese.

Bake for 60 minutes or until potatoes are fork tender and lightly browned.