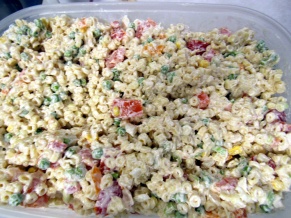 It was a gloomy Sunday.. wait, didn’t I already start a post like that recently? Lately Sundays haven’t been the bright and sunny days off I look forward to. With all of the doom and drama in the world at least the weather could cooperate. Cheesh.  It was time to create a memorable salad I would look forward to for a few meals.  It would be a meal in itself or a side dish, depending on my mood.

Well in my dim kitchen I turned on the overhead light and set to making a stupendously tasty pasta salad, I was going to do a random “dump pasta” so I didn’t take blog pictures. But by the tine I was done, it was already so tasty I regretted that.

So here’s a salad idea with awesome flavors but no working photos. I’m pretty sure you can dump everything in a very large bowl to get this made all on your own. It was just such a great combo I had to share.

I’ll even suggest you could dump more vegetables such as chopped cauliflower, broccoli, zucchini, red onion or chopped pea pods in the bowl. Have fresh corn or peas, add them instead of frozen. I actually had a lot of cauliflower, broccoli and zucchini on hand but had planned other dishes with them.

While I cooked my pasta in salted water I chopped all of the vegetables, drained and flaked the tuna and measured the dressing ingredients all into a large bowl.

I tossed the peas and corn into the pot with the pasta just to thaw them at the end of cooking. I drained the mixture into a colander and let it cool for a few minutes.

I stirred the bowl of tuna, vegetables and dressing well and dumped in the pasta and veg mixture. Again I stirred well and then tasted it.

Still warm and not even allowed a few hours to meld, the flavors were so good! That’s when I said “oh oh, I should have blogged this!” And so I did.

I poured the salad into a large storage container with a lid and refrigerated it. Supper the next evening was done. Served with a wedge of cornbread (another post) it would be a fast dinner

Do I need to say it was even better the next night? The onions and peppers had melded into the other flavors nicely.  It was the best tuna pasta salad ever! There. Another best. It’s been awhile!

A cold tuna salad with vegetables.

Stir and serve cold. Will last 4-5 days in the fridge.