Although I’ve been mostly avoiding Facebook until after the elections because it makes my brain bleed, I do look for jokes, memes and recipes occasionally. I saw a video of this recipe and gasped. I actually had 2 cans of crescent roll dough and a roast in the fridge. My roast was moose but it’s so similar to beef you wouldn’t notice the difference. I even had provolone!

This was fate: the squares were meant to be in our bellies. The recipe called for deli roast beef but poo, that stuff rarely tastes like real roast beef. I wanted the real thing and all I had to do was roast and thinly slice the moose roast. My P.S. (Princely Spouse) would be SO impressed. I rarely make the roasts.

In a large nonstick skillet  I seared all sides of my moose roast in a drizzle of oil after heavily seasoning with salt and pepper.

The recipe called for cooking the onions in a skillet since they had used deli beef. I simply sliced several onions (I had small ones so I used 3) and put them in the bottom of my Dutch oven with another drizzle of oil and 3 tablespoons of butternut into 6 or 7 smaller chunks. Hopefully the oil would prevent the butter from burning. I sprinkled thyme, salt and pepper over the onions.

I roasted the moose the day before I made the French dip squares. I let the roast cool then refrigerated it in a covered container with the onions.

The next day when the roast was chilled I cut it into about 2″ cubes and pulsed it in my food processor just until it was shredded.  It was a very firm roast, moose having very little fat content.  It was too hard to slice but shredding worked very well.

I had read the blog comments about the bottom layer of crust not being done enough so I laid out the dough in a 9×13-in pan I had sprayed and baked it for 7 minutes. By pre-baking the bottom crust I would avoid a raw or soggy mess. 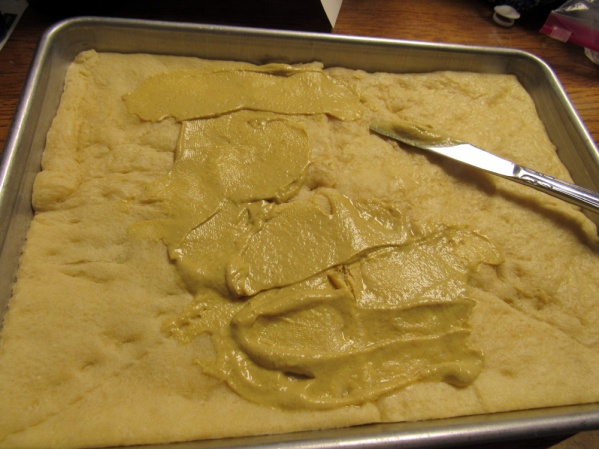 While the bottom crust baked I assembled the rest of the ingredients. I was ready to layer when I pulled the pan out of the oven. A thin layer of mustard was first.  I used a Dijon mustard, use whatever you like. 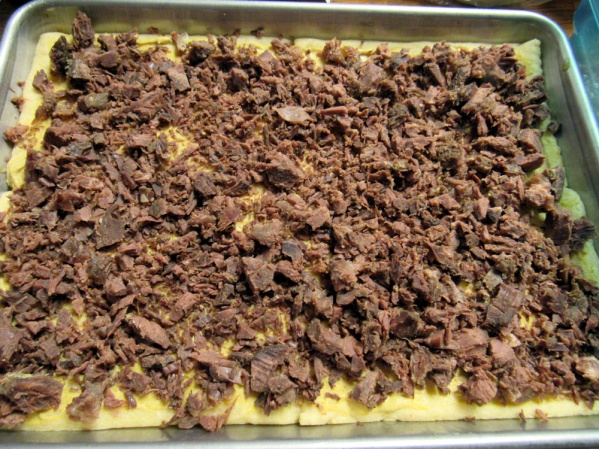 Next came a layer of the shredded beef.  I think it was about 1 1/2 cups, I didn’t measure.  I just eyeballed it. 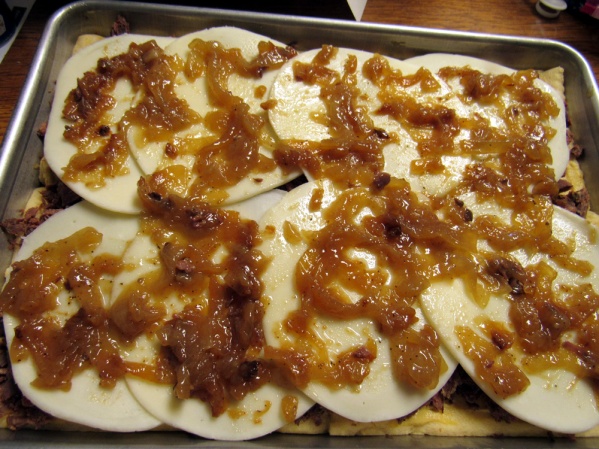 Next came the layer of Provolone, followed by the caramelized onions.

The top layer of crescent roll dough came next. I pinched the seams together, then spread the melted butter on top.

I set my timer for 35 minutes, to check for doneness. It actually took 40 minutes in my oven and it didn’t brown too rapidly.

I threw the jus Ingredients into a small saucepan and let it simmer and reduce down a bit while the squares baked. The picture above is misleading; the jus was a lovely dark brown and perfectly seasoned.

Was this good?  It was excellent!  We loved it so much!  I’d make this again, any time.  I liked the square, the super tasty jus.. the whole thing!  It was a fun and yummy version of a French Dip sandwich. 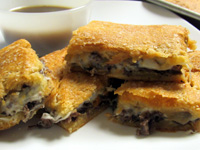 Squares of roast, caramelized onions and provolone cheese nestled between layers of crescent roll and dipped in a warm jus!

Heat a Dutch oven with a drizzle of oil over medium high heat. Brown all sides of the roast well. Add sliced onions and butter. Cover and bake for 1 1/2 hours or until internal temp is 200°F. Cool then refrigerate, covered, until used. Or use deli sliced beef and make your caramelized onions separately (see below).

Preheat oven to 350° and grease 9×13″ baking sheet with cooking-spray. Put one unrolled may of crescents on baking-sheet & then pinch together seams. Bake for 7 minutes.

Spread thin layer of mustard over baked crust, leaving 1/2″ border around the crust without mustard.. Spread out sliced beef, followed by the layer of provolone.

Cover with layer of caramelized onions.

Cover onion layer with second tube of crescent roll, making sure seams are pinched together.

Melt 2 tablespoons of butter and brush over top of dough.

Bake for 35-45 minutes or until baked through and golden. If crust browns too fast, finish cooking covered with a layer of foil.

Let stand for 15 minutes then cut into squares.

While the he pan bakes, melt remaining 1 tablespoon of butter in a medium-skillet over moderate heat. Stir in garlic and cook for several minutes. Add beef-stock, Worcestershire and 1/4 teaspoon of dried thyme. taste test and season with pepper and salt to taste. Bring to a boil then simmer for 10 minutes on low until slightly reduced.

Serve squares with au jus on the side for dipping.